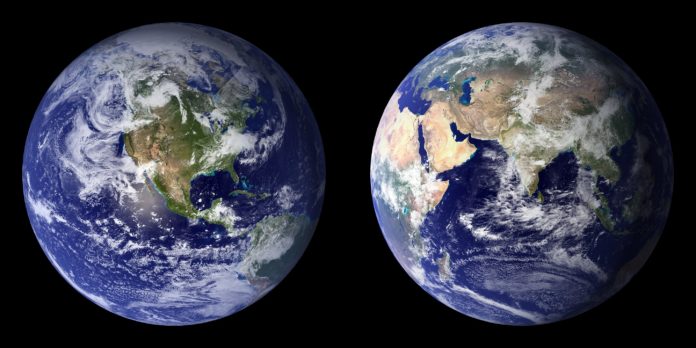 Water is an inorganic, transparent, tasteless, odorless, and nearly colorless chemical substance, which is the main constituent of Earth’s hydrosphere and the fluids of most living organisms. It is vital for all known forms of life, even though it provides no calories or organic nutrients. Its chemical formula is H2O, meaning that each of its molecules contains one oxygen and two hydrogen atoms, connected by covalent bonds.

Water is the name of the liquid state of H2O at standard ambient temperature and pressure. It forms precipitation in the form of rain and aerosols in the form of fog. Clouds are formed from suspended droplets of water and ice, its solid state. When finely divided, crystalline ice may precipitate in the form of snow.

The gaseous state of water is steam or water vapor. Water moves continually through the water cycle of evaporation, transpiration (evapotranspiration), condensation, precipitation, and runoff, usually reaching the sea.

How exactly did water appear on Earth?

One factor in estimating when water appeared on Earth is that water is continually being lost to space. H2O molecules in the atmosphere are broken up by photolysis, and the resulting free hydrogen atoms can sometimes escape Earth’s gravitational pull (see: Atmospheric escape). When the Earth was younger and less massive, water would have been lost to space more easily. Lighter elements like hydrogen and helium are expected to leak from the atmosphere continually, but isotopic ratios of heavier noble gases in the modern atmosphere suggest that even the heavier elements in the early atmosphere were subject to significant losses.

In particular, xenon is useful for calculations of water loss over time. Not only is it a noble gas (and therefore is not removed from the atmosphere through chemical reactions with other elements), but comparisons between abundances of its nine stable isotopes in the modern atmosphere reveal that the Earth lost at least one ocean of water early in its history, between the Hadean and Archean eras.

Any water on Earth during the later part of its accretion would have been disrupted by the Moon-forming impact (~4.5 billion years ago), which likely vaporized much of Earth’s crust and upper mantle and created a rock-vapor atmosphere around the young planet. The rock vapor would have condensed within two thousand years, leaving behind hot volatiles which probably resulted in a majority carbon dioxide atmosphere with hydrogen and water vapor.

Afterwards, liquid water oceans may have existed despite the surface temperature of 230 °C (446 °F) due to the increased atmospheric pressure of the CO2 atmosphere. As cooling continued, most CO2 was removed from the atmosphere by subduction and dissolution in ocean water, but levels oscillated wildly as new surface and mantle cycles appeared.

There is also geological evidence that helps constrain the time frame for liquid water existing on Earth. A sample of pillow basalt (a type of rock formed during an underwater eruption) was recovered from the Isua Greenstone Belt and provides evidence that water existed on Earth 3.8 billion years ago. In the Nuvvuagittuq Greenstone Belt, Quebec, Canada, rocks dated at 3.8 billion years old by one study and 4.28 billion years old by another show evidence of the presence of water at these ages. If oceans existed earlier than this, any geological evidence either has yet to be discovered or has since been destroyed by geological processes like crustal recycling

Unlike rocks, minerals called zircons are highly resistant to weathering and geological processes and so are used to understand conditions on the very early Earth. Mineralogical evidence from zircons has shown that liquid water and an atmosphere must have existed 4.404 ± 0.008 billion years ago, very soon after the formation of Earth. This presents somewhat of a paradox, as the cool early Earth hypothesis suggests temperatures were cold enough to freeze water between about 4.4 billion and 4.0 billion years ago. Other studies of zircons found in Australian Hadean rock point to the existence of plate tectonics as early as 4 billion years ago. If true, that implies that rather than a hot, molten surface and an atmosphere full of carbon dioxide, early Earth’s surface was much as it is today. The action of plate tectonics traps vast amounts of CO2, thereby reducing greenhouse effects, and leading to a much cooler surface temperature, and the formation of solid rock and liquid water.