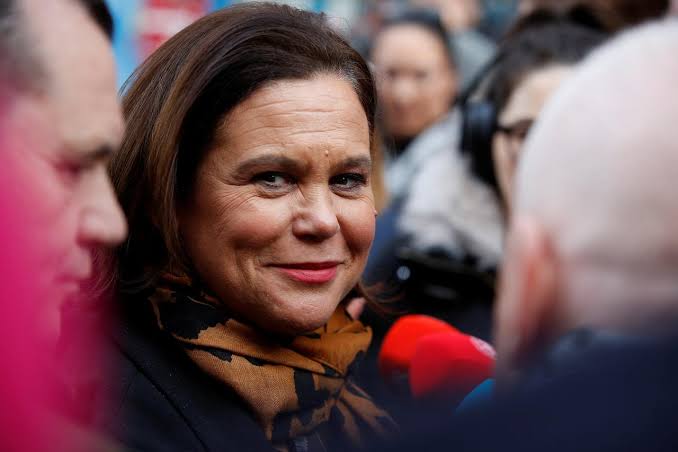 For decades Sinn Fein activists insisted the star power of Gerry Adams, a former Irish Republican Army spokesman, could not be replicated among the party’s Irish nationalist base.

Two years after Adams stepped down as longtime party head and in the run-up to next Saturday’s national election, new leader Mary Lou McDonald is proving the power of a broader appeal.

The left-wing Sinn Fein shocked the country when it emerged as the most popular party in an opinion poll released on Monday, with 25% of support, up from 14% support in the 2016 vote.

The party is likely running too few candidates to lead the next administration and its rivals say they will not form a coalition government with it. But McDonald, a Dublin-born politician from a middle-class background, is bringing Sinn Fein closer to its historic goal of entering government in Dublin while leading Belfast’s power-sharing executive.

Many Irish voters still oppose Sinn Fein for its role as the political wing of the IRA during a decades-long fight against British rule in Northern Ireland in which some 3,600 people were killed. Adams was the face of that resistance for much of his 34 years as Sinn Fein’s leader.

McDonald, 50, has opened the party up to address the concerns of a new generation that is more preoccupied with the soaring cost of housing than with Sinn Fein’s ultimate aim of unifying Ireland and Northern Ireland.

In Monday’s poll, the party enjoyed more support among 25-34 year olds than the century old, centre-right duopoly of Fine Gael and Fianna Fail combined. It was also by some distance the first choice for those aged 35 to 49. Voters above the age of 50 still preferred the two dominant parties in Irish politics.

“There is a really dramatic difference between how older voters view Sinn Fein and how younger voters do,” said Una Mullally, a writer and women’s rights activist. “The other parties aren’t connecting with the political desires of this generational shift.”

McDonald has positioned herself as a “progressive, feminist, female leader who is very much chiming with the times,” she said.

In a sign of McDonald’s appeal, during a march this week by thousands of childcare workers demanding better pay, protesters cheered her name as they passed a news conference outside Sinn Fein’s nearby offices – drowning out questions over a senior party figure’s comments regarding a 2007 murder carried out by the IRA.

“Mary Lou appeals to me. She happens to be Sinn Fein but that’s the way it is. She gets it,” said Geraldine Travers, a 56-year-old lifelong Fianna Fail voter who is switching to Sinn Fein this time and was among the crowd.

Travers said she was less concerned about the IRA controversy that has dominated media coverage in recent days and more worried for two of her working adult children, one of whom lives at home and the other who needs help paying the rent.

Successive polls have shown voters moving to Sinn Fein over the defining campaign issue of housing. Rents in Dublin are now higher than Tokyo and Sydney, and almost 10,000 homeless people, many of them families, are stuck in temporary accommodation like hotels.

McDonald’s stock has rocketed as a result, making her by far the most popular leader in Monday’s Ipsos MRBI poll. A minority government led by Fianna Fail, which is running twice as many candidates, remains the most likely outcome, the poll suggested.

“I’m a good friend of Mary Lou’s, she’s a very decent person and that radiates. People notice that,” said Louise O’Reilly, a senior member of the Sinn Fein front bench. “It hasn’t surprised me how popular she has become.”

Rival parties say Sinn Fein has not really changed. Fine Gael leader Leo Varadkar has said it is “not a normal party” while Fianna Fail leader Micheal Martin said he could never trust its lawmakers.

Both say the party’s leadership structure allows unelected party officials to dictate policy. Sinn Fein disputes this, saying its ruling executive is no different to any other political party’s governing body.

But the party also has one foot in the political centre with policies that are pro-immigration and socially progressive.

Ireland is the most pro-EU member state, and the party has dropped much of the Euroscepticism it campaigned on in 2004 when McDonald became its first member elected to the European Parliament from the Irish Republic.

However many credit McDonald’s role in the 2018 referendum that voted to liberalise Ireland’s abortion laws with laying the groundwork for the surge in support for both her and the party, particularly from younger voters.

While Varadkar led the referendum campaign for the government and, as Ireland’s first gay prime minister, is seen abroad as a symbol of change, McDonald may be the main beneficiary of the recent sweeping social changes in the once staunchly Catholic country.

“Mary Lou almost has fans, younger women in particular. Yes a lot of working-class women but a lot of middle-class women as well,” said Mullally, who was also involved in the abortion rights campaign.

“They respect her and a lot of younger women became politicised during that campaign.”