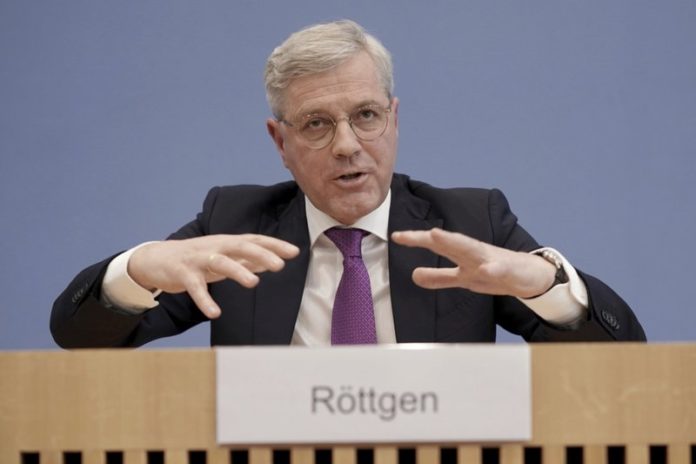 A former German environment minister on Tuesday became the first prominent figure officially to declare his candidacy for the leadership of Chancellor Angela Merkel’s center-right party.

Norbert Roettgen, the 54-year-old chairman of the German parliament’s foreign affairs committee, announced his unexpected decision in Berlin. His chances are at best uncertain against the three potential candidates who so far have drawn the most attention: former parliamentary group leader Friedrich Merz, state governor Armin Laschet and Health Minister Jens Spahn.

The current leader of the Christian Democratic Union, Annegret Kramp-Karrenbauer, defeated Merz and Spahn to win the job in late 2018. Still, she struggled to impose her authority. She announced last week that she wouldn’t enter the race to be Germany’s next chancellor and would also give up the CDU leadership, but would remain defense minister.

It isn’t yet clear how and when the next CDU leader — who likely will become the center-right’s candidate to become Germany’s next chancellor — will be chosen.

Merkel, who has led Germany since 2005, has said she won’t seek a fifth term as chancellor in Germany’s next general election, which is currently expected late next year. The withdrawal of Kramp-Karrenbauer, who was clearly Merkel’s preferred heir apparent, shows some disarray in the party.

Roettgen’s candidacy could complicate some party members’ calls for the main hopefuls to thrash out a solution between them, avoiding a prolonged public leadership fight. But Roettgen said the race shouldn’t just be about “three aspirants somehow being satisfied and then we have peace,” but about a “strategic, substantial positioning of the CDU.”

Kramp-Karrenbauer’s announcement last week followed a scandal over the election of a state governor in the eastern region of Thuringia, backed by both regional CDU lawmakers and the far-right Alternative for Germany party. The local CDU lawmakers defied the national leadership’s wishes to avoid risking an alignment with the far-right.

Merkel fired Roettgen as environment minister in 2012 after he led the CDU to an embarrassingly heavy state election defeat in North Rhine-Westphalia, Germany’s most populous region, following a campaign marred by gaffes.

Roettgen says he has learned from that defeat. He set out a broadly centrist leadership pitch on Tuesday , declaring that “the CDU must win back ecological credibility in general and climate policy credibility in particular.”

Otherwise, he said, “we as a party risk losing at least a whole generation.”