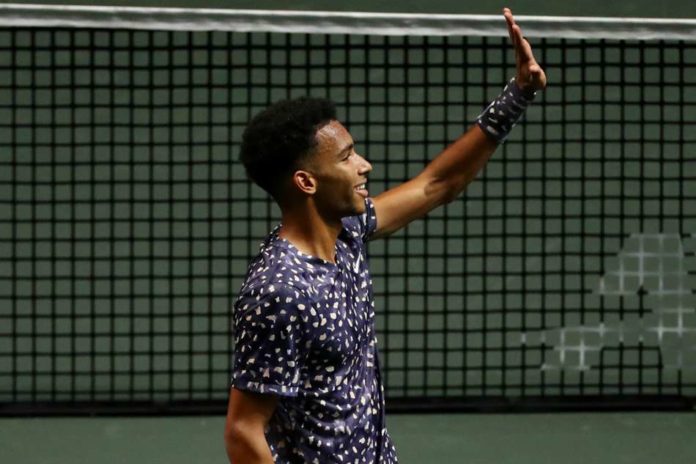 Gael Monfils and Felix Auger-Aliassime scored tight straight-set wins in the semifinals of the ABN AMRO World Tennis Tournament on Saturday, setting up their first-ever meeting on Sunday, for the title of the 500-level tournament.

“Felix is a great guy. A humble guy. Very strong. He’s a very talented guy,” Monfils told ATPTour.com about his next opponent. “Definitely, I expect a tough match, but a cool match because I think we might see him for a long time, definitely in this part of a tournament on this stage.”

Auger-Aliassime was the first to reach the final in Rotterdam, beating former No. 10 and 2017 US Open semifinalist Pablo Carreno Busta, 7-6 (2), 6-4. After taking the first set in a tie-break, the 19-year-old Canadaian got the only break of the match in the third game of the second set, and held the rest of the way.

“I was serving the best I’ve ever served in that first set and then played a solid tie-break,” Auger-Aliassime said after the match. “In the second set things got interesting with that long [third] game. I was thinking, ‘If this goes my way, it might be tough for him.’ So I really pushed to get through. Obviously you know the end is coming if you keep serving well and you keep holding your serve.

“Things got a little bit difficult, saving that break point [at 4-3 in the second set] after making some tight mistakes. It was not easy. I came up clutch again, so obviously I’m happy with myself.”

Auger-Aliassime is now a win away from the first ATP title of his career. It’ll be his fourth appearance in an ATP final, having reached his first three last year, at Rio de Janeiro, Lyon and Stuttgart.

The world No. 21 is projected to return to the Top 20, win or lose. If Auger-Aliasssime wins, he’ll rise to No. 15, which would be his Top 15 debut. Doing so would also make him the new Canadian No. 1, passing Denis Shapovalov.

“He wasn’t missing at all,” Monfils said. “He made some tough shots on match points. I was lucky he missed that volley at 5-4 and then I hit a great return at 5-5, and a great serve to close the match.”

The 33-year-old Frenchman finished the match with 35 winners to just 20 unforced errors.

It was the pair’s second meeting in the last seven days—Monfils had beaten the Serb in another tight two-setter last Saturday, in the semifinals of Montpellier, 7-6 (4), 6-2.

Auger-Aliassime isn’t the only player going for a big milestone on Sunday. Monfils is vying for the 10th ATP title of his career, and is trying to win two titles in as many weeks for the first time in his career. He’s never won two ATP titles in the same season before.

The Frenchman, who won Rotterdam last year, is also trying to successfully defend an ATP title for the first time in his career. This is already the furthest Monfils has ever gone when defending a title.