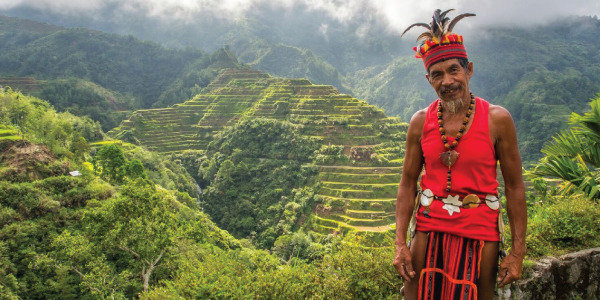 Ifugao is a landlocked province of the Philippines in the Cordillera Administrative Region in Luzon. Its capital is Lagawe. The culture of this province revolves around rice, which is considered a “prestige crop”. There are elaborate feasts revolving around rice culture, linked with taboos and agricultural rites – from rice cultivation to rice consumption. Harvest season is celebrated with grand thanksgiving feasts, and the end of harvest season involves the rites tungo or tungul (the day of rest) – entailing a strict taboo of any agricultural work. Rice wine (bayah), rice cakes, and moma (mixture of several herbs, powdered snail shell and betel nut/arecoline which is used as a chewing gum in Ifugaos) are an important part of the festivities and rituals. Agricultural terracing and farming are the primary means of livelihood. People’s social status is often measured by the number of rice field granaries, family heirlooms, gold earrings, and carabaos (water buffaloes) they possess. When harvest begins, a prayer is said by an elderly woman, directed towards Cabunian, the Goddess of rice. Then, a protective prayer is said before the rice is placed in the granary. The more affluent strata of society, known as kadangyan or baknang, are generous and lend rice to poor neighbours during food shortage in return for labor. Essaying the role of village leaders, creditors or commercial managers, these rich families exhibit their wealth by providing for many feasts.

Vegetables are expensive in Ifugao. In Metro Manila, buying a kilo of cabbage at the supermarket could cost up to 106 Pesos, based on the latest survey of the Philippine Statistics Authority, and Broccoli is an absolute luxury. But in the mountains of the Ifugao province, farmers are left with no choice but to sell their crop for as low as 7 Pesos a Kilo – sometimes even lower.

In Tinoc, Ifugao, there is an ongoing harvest of cabbage (Wonderball variety) that is to be transported to the municipality of La Trinidad. A farmer of the Kalanguya indigenous group, mentions that he prefers this variety because it won’t crack while being stocked and does not require immediate harvesting – this gives him the flexibility to choose the harvesting time, as well as the liberty of transporting it to further distances. His farm is located between 2 trading posts: La Trinidad in Benguet and the Nueva Vizcaya Agricultural Terminal, Inc. He’s betting on the La Trinidad one as premium vegetables are usually sold at a better price. This is his second harvest and the first harvest sold at 7 Pesos per kg. The price of his second harvest will only be known at the trading post after selling/bargaining with potential buyers.

A glance at the wholesale price list at the Nueva Vizcaya trading post shows first-class cabbages selling for around P4 to P6 a kilo, Broccoli at P13 to P16, and wombok (chinese cabbage) ranging from P4 to P5. The most expensive produce on the list is Hawaiian ginger – going as high as P75 per kilo.

The unsold crops are eventually being fed to livestock, and farmers are unable to fathom as to why the prices increase so much as soon as the crops reach the capital region, Metropolitan Manila. Some suspected it was the outbreak of Corona Virus that led to reduction in purchase of freshly grown farm produce, and some suspect poor monitoring.

At the end of the day, it’s the farmers of Ifugao, who are struggling between other vegetable farms like Benguet and Nueva Vizcaya, to get fair pricing that does justice to their months of efforts and savings. In a sad state of affairs in most Asian countries, farmers bear the brunt of either poor implementation of policies, or climate change – whereas they are the strata of society that deserves the most amount of recognition and money for putting food on our tables and for the dedication they put into producing the best quality of vegetables for us.

Think twice before you waste food – somewhere in the world, a farmer would’ve sacrificed his meal just to put one on your table. This is the least we can do for them as mere citizens.