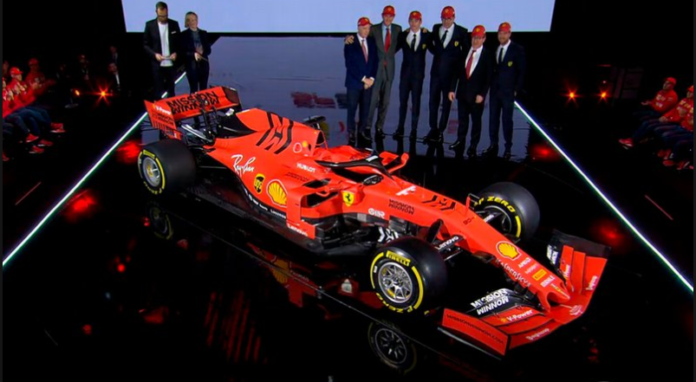 Ferrari’s 2020 car will be called ‘SF1000’, as the Scuderia will compete in its 1000th race this year. They will become the first F1 team in history to achieve the feat.

The car launch is taking place at the historic Romolo Valli Municipal Theatre, in the Italian city of Reggio Emilia. Scuderia said it chose this location because “223 years ago, this city was where the tricolour was born and later adopted as the flag of unified Italy”.

Ferrari have retained their driver pairing of Sebastian Vettel and Charles Leclerc for the 2020 season. Last year, the team struggled to keep up with Mercedes, who claimed both the drivers’ and constructors’ titles. Leclerc, though, impressed in his debut season with Ferrari. The 22-year-old won two races, one more than Vettel, and finished fourth in the standings, 24 points clear of his team-mate in fifth.

After a spectacular introduction, featuring an orchestra, choir and ballet dancers, as well as speeches from Ferrari CEO Louis Camilleri and Team Principal Mattia Binotto in front of a video backdrop of Ferrari’s F1 history, the new car made its appearance.

Binotto confirmed that the SF1000 – so called to celebrate the year in which Ferrari will contest their 1,000th Formula 1 World Championship event – was an evolution of last year’s SF90, the car that finished second to Mercedes in the 2019 constructors’ standings – with the technical regulations having remained largely stable for 2020 ahead of Formula 1’s major rule upheaval in 2021.

However, Binotto was keen to stress that Ferrari had tried to push their concept forward for 2020 as much as possible. “The starting point was the car of last year, the SF90,” said Binotto. “But certainly we have been extreme on the concept as much as we could… It may look similar to last year but it’s completely different to the one of last year, and a lot of the concepts are very extreme on [the SF1000].”

Binotto also said that a key focus for Ferrari in 2020 would be improving reliability, as well as righting the wrongs of the 2019 season – a year which saw the team outscored 739 points to 504 by Mercedes. “The [technical] group is still young,” said Binotto. “We still have to grow, we have to learn from our mistakes, we have to capitalise on this and concentrate on reliability, which was one of the weak points last season. “At the same time we have the 2021 project that… is the greatest change that has ever occurred in F1 since the beginning. We have to be ready for this.”

Ferrari had one very obvious technical strength last year (their power unit) and one troublesome weakness (their aerodynamics).

This neatly frames the challenge for the Scuderia’s new car. On the one hand, the team must hope that their new engine – said to employ new piston technology and a completely reworked combustion chamber – can maintain the power advantage, especially under new regulations that specify two fuel flow sensors.

Concurrently it has been conceived specifically to address the aero balance that, for much of last year, left their predecessor with an insufficiently loaded front axle.

On the engine front, Ferrari boss Mattia Binotto was last year indignant at the suspicion surrounding their power advantage. The new double fuel flow regulation was put in place partly in answer to rivals’ theories about how Ferrari was driving that advantage. We can be sure that the Scuderia engine department will have been hugely motivated to maintain that advantage under the revised regulation.

Last year’s aero problem was only discovered once the season was underway – and correcting it was a long-term project that took until Singapore to bear full fruit. That seriously compromised any title aspirations the team had. Any realistic shot at the 2020 championship is likely dependent upon a car that has no underlying significant flaw from the off – as the team managed to do in 2017 and ’18.

It has surely been helped in this aim by the unchanged aero regulations for this year, and clearly the car has tighter packaging than its predecessor. As with any launch car, this machine can be expected to evolve significantly before Australia (and even before testing in Barcelona), but if the front wing on the launch-spec SF1000 is indicative of what it will run in testing next week, it looks like the Ferrari aero department has stayed with the unloaded outboard front wing concept.

The car produced in Maranello, will make its official track debut in the hands of Sebastian Vettel and Charles Leclerc at the first pre-season test, in the week following the launch, at the Barcelona-Catalunya Circuit in Montmelo, Spain.