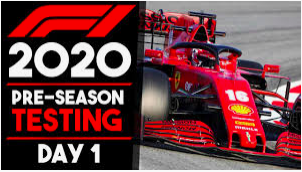 Ah testing, the time of the year when teams run their cars for hours and hours, setting lap times which are meaningless because they are all running varying fuel loads and varying wing levels. This year, we only have six of these glorious days to enjoy – so what takeaways do we have from day one?

The Cars Are Reliable

Mileage – and lots of it – was the theme of the day at a sunny-but-chilly Circuit de Barcelona-Catalunya, as all 10 teams clocked up the laps in a remarkably reliable and efficient opening day. An incredible 1,417 tours of this famous Spanish circuit were completed, the equivalent of a staggering 20-and-a-half Spanish Grand Prix distances.

As ever, the focus is on proving reliability, especially as there are two fewer days of running this year, but it seems like the teams had no problem on that front. All 10 squads managed 100 laps or more.

World champions Mercedes led the mileage charts, with Lewis Hamilton and Valtteri Bottas sharing the running as they notched up 173 laps. Red Bull were five laps behind, Max Verstappen opting to do the whole day and declaring himself very happy with how the RB16 performed, despite a couple of spins.

McLaren had a productive day, too, Carlos Sainz clocking up more than 160 laps. The Spaniard didn’t look tired, either – it must have been all that squash and boxing training he’s been doing over the winter…

Kevin Magnussen admitted to being sore and having a few bruises, though, having clocked up a century of his own. It was the most running he’s done since the finale in Abu Dhabi.

We shouldn’t be surprised, of course. The regulations have stabilised and matured, so while some cars look very different, we’re seeing evolutions of cars that the engineers now have a very good handle on. There’s also been plenty of dyno running over the winter, so teams will have been reasonably confident things would work, particularly given most had already done a filming day, also known as a shakedown. So expect more of the same mileage tomorrow.

As well as clocking up an impressive lap count, Sainz was pretty happy with how the MCL35 felt (“amazing”, in case you were wondering). And if that wasn’t enough, the Renault-powered team sat pretty at the top of top speed charts with 329.5km/h through the traps.

Honda-powered Red Bull were next best, 2km/h adrift with Ferrari propping up the charts around 21km/h slower. I’d take these figures with a large pinch of salt, mind, as teams will have been running a variety of wing levels throughout the day as they carry out various aerodynamic tests.

Each To Their Own

Barcelona has become Formula 1’s favoured testing venue in recent years, its demanding layout featuring a mix of medium and high speed corners with a couple of slow turns thrown in for good measure. A variety of fuel loads are sure to have been used. A difference of 10kg of fuel can translate to as much as three or four tenths of a second, so it’s notoriously dangerous to read too much into the headline times – but we can see some trends.

World champions Mercedes have started this year’s pre-season on the front foot, in contrast to last year, and carried out a series of short to medium runs across the day, with comfortable breaks in between.

Bottas and Hamilton’s respective best laps came on their third-from-last runs, with Hamilton coming out on top by three-tenths. More impressively, Hamilton was running the C2, a step harder than the C3 Bottas was running for his best lap.

Sergio Perez put Racing Point (with a car that has striking similarities to last year’s Mercedes) in the headlines as they ended up as the second quickest team overall. However, he completed a series of shorter stints, with his best lap coming on one a third of the length of Hamilton’s, suggesting the RP20 was running much lighter.

Red Bull did a series of shorter runs, too, but they had a much shorter gap between each, suggesting they weren’t refuelling in between. That bodes very well for their overall pace, with Verstappen’s best lap coming on the middle compound tyre. Early signs suggest they have made a step forward this year.

McLaren completed what looked like a race simulation in the afternoon, with Sainz completing three very even stints early in the afternoon, before they turned their attention to shorter runs, allowing the Spaniard to set his best lap inside the final hour of running. It’s early, but they look to be commanding the midfield once again.

All in all, it was a good day all round for everyone involved. Fortunately, there’s not a snowflake in sight around Barcelona, so expect the teams to make the most of the good weather predicted for the rest of the week.