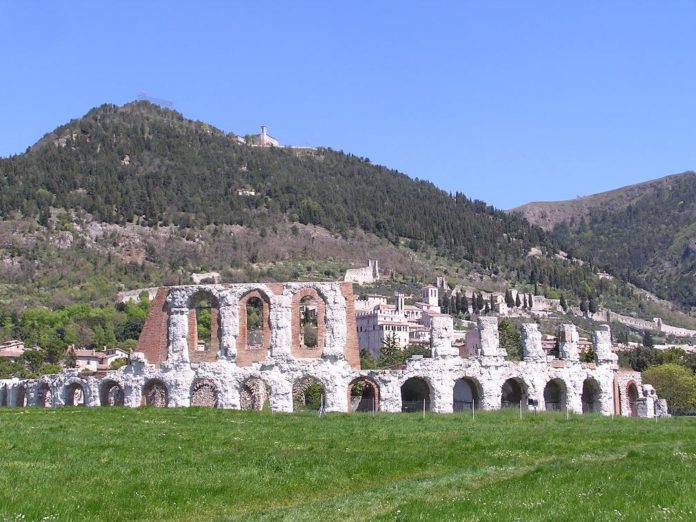 Gubbio is one of the most beautiful cities in Umbria. It is also a perennial favorite with guests. This city is located on the lower slope of Mount Ingino, a small mountain in the Apennine Mountain chain. Gubbio is about a thirty minute drive from our home base in Pietralunga, in the northeast corner of the region of Umbria. Very ancient, the city was inhabited prior to the Romans by the Umbrian peoples, the first tribe to inhabit the Italian peninsula. Even today, the majority of houses in the city center are 14th and 15th century and the streets wind this way and that-perfect for an adventure of exploring.

Gubbio was already occupied in the Bronze Age by the Umbrian tribe. In fact, a museum in Gubbio contains the Eugubine Tablets, the largest surviving text in the Umbrian language. Following the Umbrian occupation of Gubbio, however, the city encountered centuries of turbulent warfare with various of the other Umbrian cities. One such war led to a miraculous intervention of Gjubbio’s bishop, later canonized as Saint Ubaldo and today the patron saint of Gubbio.

The historic sections of Gubbio still contain workrooms that carry on ancient craft traditions for which Gubbio has been renowned for centuries. You can wander into workrooms where bookbinding with leather is done in the ancient way, or shop in ceramic shops where majolica is made in the Gubbio tradition where special luster glazes imitate gold and copper. If you are feeling more adventerous, you can travel by funivia (a two person cable car) up the side of Monte Ingino to reach the cathedral dedicated to Saint Ubaldo. The view of the valley below is spectacular and the visit to the cathedral worth the short trip.

Each May 15, Gubbio is host to literally thousands of people who come to watch the centuries old running of the Festival of the Candles. The race, which dates back at least one thousand years, is run to honor three saints-Saint Ubaldo, Saint Anthony and Saint George. Supporters of each saint are easily identified by the color of their shirts-yellow for Ubaldo; blue for Anthony and black for George. Worn with white trousers, red neck scarfs and belts, the visual impact of thousands of these costumes is unbelievable. These three teams carry huge wooden “candles”, each weighing near half a ton, up the mountain from the main piazza to the cathedral of Saint Ubaldo at the top. I have been informed that tradition requires that Saint Ubaldo’s team always wins.

The Roman influence is also clearly seen in Gubbio. On the outskirts of town are the remains of a Roman amphitheater, purportedly the second largest surviving one. Guests often picnic in the adjacent park and photograph, sketch or paint the city scape above the theater. We often see hang-gliders landing in the adjacent park at the end of their flight which originates at the top of the mountain.