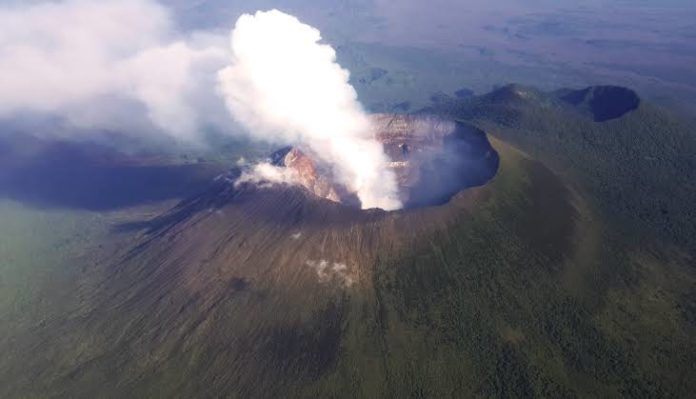 Nyiragongo volcano is located in Virunga National park in the Democratic Republic of Congo DRC, At around 19 kilometers of Goma, very close to Rwandan border, in a safe and easily accessible area. The Nyiragongo is one of Africa ‘s most dangerous and the most famous for its semi permanent lava lake. The volcano is also known to the people of Congo as a sacred mountain where an angry spirit is trapped, The volcano is still active and it has erupted several times throwing lavas toward the town of Goma and other neighboring villages.

Any body knows about how long the volcano has been erupting, but since 1882, it has erupted at least 34 times, including many periods where activity was continuous for years at a time, often in the form of a churning lava lake in the crater. The volcano partly overlaps with two older volcanoes, Baratu and Shaheru, and is also surrounded by hundreds of small volcanic cinder cones from flank eruptions.

Volcanism at Nyiragongo is caused by the rifting of the Earth’s crust where two parts of the African Plate are breaking apart. A hot spot is probably also partly responsible for the great activity at Nyiragongo and Nyamuragira.

The lava emitted in eruptions at Nyiragongo is often unusually fluid. Nyiragongo’s lavas are made of melilite nephelinite, an alkali-rich type of volcanic rock whose unusual chemical composition may be a factor in the unusual fluidity of the lavas there. Whereas most lava flows move rather slowly and rarely pose a danger to human life, Nyiragongo’s lava flows may race downhill at up to 60 miles per hour (up to 100 km/h). This is because of the extremely low silica content. Hawaiian volcanic eruptions are also characterized by lavas with low silica content, but the Hawaiian volcanoes are broad, shallow-sloped shield volcanoes in contrast to the steep-sided cone of Nyiragongo, and the silica content is high enough to slow most Hawaiian flows to walking pace.

The last known eruption was in 2002. The Volcano erupted and ajected a large cloud of smoke and ash high into the sky and spewing lava down three sides of the volcano. One river of lava flowed right through the center of Goma and into Lake Kivu , effectively bisecting the city. Hundred of people were burnt to death . At least 400,000 people fled their homes when the lava swept down the flanks of Mount Nyiragongo and through Goma’s main street before pouring into Lake Kivu on the Rwandan border. The thousands of displaced, came back after three days and tried to rebuild their lives by erecting wooden huts on top of the lava. Somewhere beneath lay the remains of their homes.

The lava had set like concrete. It was impossible to dig trenches for water supplies and drainage. Even to sink a hole for the simple African drop toilet wasn’t possible. The sharp irregular stones made walking difficult and slashed the tires of cars and motorbikes.

Lava dictated everything. It was the foundation for people’s homes, their yards, the building blocks for yard walls and the surface of the roads. Buildings that had survived were submerged and set fast one story deep in it.

Even if the 2002 eruption was described by many Congolese as the worse; But the 1977 was many times than it. The difference is that the first didn’t destroy houses like the last one, but its burnt many peoples. On 10 January 1977, the crater walls fractured, and the lava lake drained in less than an hour. The lava flowed down the flanks of the volcano at speeds of up to 60 miles per hour on the upper slopes, overwhelming villages and killing at least 2000 people. Some reports quote much higher figures of up to several thousand people. The hazards posed by eruptions like this are unique to Nyiragongo. Nowhere else in the world does such a steep-sided stratovolcano contain a lava lake containing such fluid lavas.

Efforts have been made to level the lava on the way to the lake, so that it can be used as a road. “I visited several volcanoes with different grades of activity before, but never saw its destructive powers in a way like this. The landscapes that it created are amongst the most bizarre I’ve ever seen” says one traveler. Let’s hope the people of Goma, will finally reach a life without natural disasters and equally disastrous effects of political struggle!