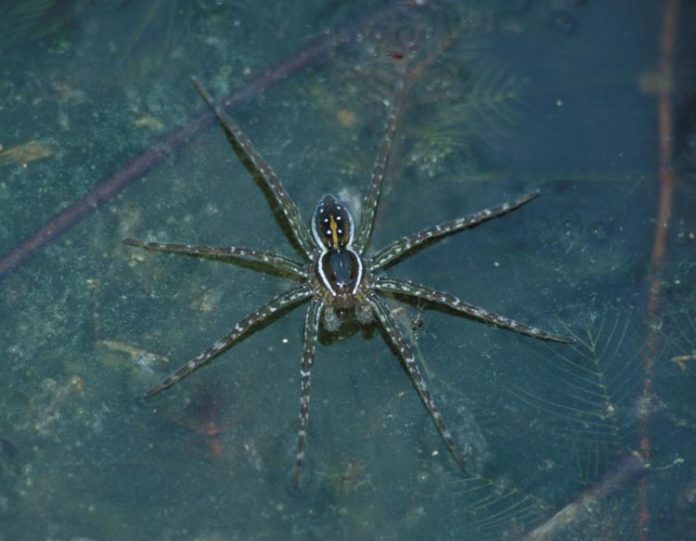 Water spiders are small measuring approximately 10 to 15mm. They have a dark brownish or velvet gray colored body. They do not have gills to breath under water. Instead, fine hair covers their abdomen. These trap air bubbles which are utilized for breathing. It weaves webs under water as well and deposits these air bubbles onto the webs. It takes many trips in order to cover the web completely with the air bubbles. This makes the web appear in a bell shape and thus the name diving bell. The oxygen from the water infuses into the bell and carbon dioxide diffuses out. This keeps the spider rid of replenishing air supply in the bell. The bell structures constructed by the female species are bigger as compared to that made by the male species. They breathe in and out from small holes located below their abdomen which are in turn connected to organs resembling lungs. They carry these air bubbles while swimming long distances.

They inhabit freshwater bodies like ponds and lakes. Water spiders are can swim quite well. In fact, the males are considered better swimmers and hunters compared to the females. They mostly feed on crustaceans, mites, phantom midge larvae, mayfly nymphs and insects. They use their strong fangs for biting. Their bite in humans is often very painful. They immobilize their prey by their venomous bites. They catch their prey and return to their bell for digestion. Water spiders are hunted by frogs or fishes.

The males are larger than females. They construct a bell beside that of a female. The male also constructs a tunnel for entering the bell of the female. Mating occurs in the bell of the female and she lays 30 to 70 eggs in specially earmarked chambers. The young spiders have average life expectancy of 2 years.

They shed their skin near vegetated locations outside water or specially constructed bells. The air bells help them to breathe, mate, molt, lay eggs and bring up young ones as well without getting noticed by predators.