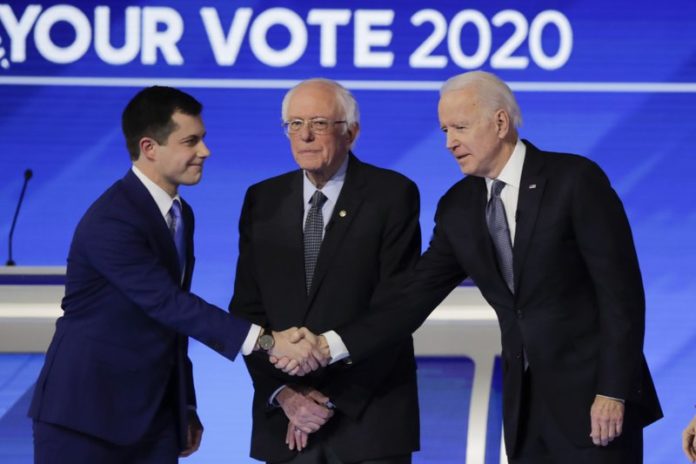 For Democrats, this was supposed be a moment to begin easing three years of built-up of anxieties. Instead, the launch of the 2020 presidential primary has left the party deeply unsettled and President Donald Trump gleeful about the chaos.

Party leaders are on edge over embarrassing technical issues that marred this past week’s Iowa caucuses, as well as lower than expected turnout in the leadoff state. Front-runners Bernie Sanders and Pete Buttigieg face questions about their long-term political viability, while some supporters of the two leading women left in the race — Sens. Elizabeth Warren of Massachusetts and Amy Klobuchar of Minnesota — are raising alarms about what they view as persistent sexism.

Indeed, it’s far from the 2020 launchpad most Democrats envisioned as they eagerly anticipated their opportunity to take on Trump. The turbulent start to this election year has also crystallized the challenges confronting Democrats in trying to mount a formidable challenge to an incumbent backed by an energized and united Republican Party and fortified by a soaring economy.

“We’re capable of shooting ourselves in the foot,” warned Jim Hodges, an ex-South Carolina governor who supports former Vice President Joe Biden in the 2020 race. Hodges is among those who predict that Sanders, a Vermont senator who is a self-described democratic socialist, would be a weak general election candidate.

With one primary contest complete and the second scheduled for Tuesday in New Hampshire, some sorting of the Democratic field has begun.

Though The Associated Press has been unable to declare a winner in last Monday’s Iowa caucuses, Sanders and Buttigieg, a former mayor of South Bend, Indiana, emerged in an effective tie.

Biden, the longtime national front-runner, finished a distant fourth in Iowa. He’s now facing a money crunch, a staff shakeup, and a looming challenge from billionaire Michael Bloomberg. The former New York City mayor isn’t competing in the early states, but is spending hundreds of millions of dollars in later contests.

Sandwiched in between is Warren, who finished third in Iowa and is struggling for a breakout moment. Some Democrats argue that she’s been discounted prematurely, and suggest sexism is at play.

“We’re going to decide after one night in which she placed third, and a strong third, we’re going to decide there are four candidates left, one of whom finished fourth and one of whom wasn’t even running in Iowa,” said Christina Reynolds, vice president of communications at Emily’s List. “It is sadly not surprising because unfortunately it’s happened way too much in this campaign.”

Even with the technical glitches and delayed results, Iowa does appear to have rewarded Sanders and Buttigieg with a burst of momentum heading into New Hampshire. Both, however, face questions about their viability.

Some party leaders privately view a Sanders as a risky nominee in swing states, and for House and Senate candidates in places such as Colorado and Arizona. Sanders is attuned to that concern and has made an appeal for party unity a central part of his pitch in recent weeks.

Buttigieg, the youngest candidate in the race at 38, has made a compelling case for generational change, but there are questions about his experience and his appeal to minority voters who are the backbone of the Democratic Party. He struggled in the Friday’s debate when challenged on the incarceration rates for black residents of South Bend, where he was mayor for eight years. It’s the highest electoral office he’s held.

New Hampshire is the next chance for Sanders and Buttigieg to project strength. Expectations are particularly high for Sanders, who won the state by more than 20 percentage points in 2016 over Hillary Clinton, the eventual nominee. Sanders struggled in the later, more diverse states, and has spent the past four years courting voters and community leaders in those places in hopes of avoiding a repeat.

The prominence of Iowa and New Hampshire has long been criticized by Democrats who argue that two small and predominantly white states set the tone for the nominating contest. That criticism skyrocketed after this week’s caucus failures. But no Democrat has become the nominee without winning at least one of the first two states since Bill Clinton in 1992.

Biden is all but conceding that he will have to follow that same path if he is to become the nominee. After a disappointing fourth place finish in Iowa, Biden said in Friday’s debate that he expects to take a hit in New Hampshire as well.

After the Iowa debacle, Bloomberg’s team announced plans to double the $300 million it already has spent on television advertisements, and campaign strategists are signaling that they expect Biden to crater in the coming weeks.

“I don’t think that, quite frankly, anyone that has not won one of those two states, other than Mike, will go on to be the nominee,” said Kevin Sheekey, Bloomberg’s campaign manager.

Bloomberg is courting Biden donors — for support, not money — as well as moderate lawmakers who worry that Sanders or another liberal would put their House seats in swing districts at risk. In the past week, Bloomberg’s team announced endorsements from New Jersey Rep. Mikie Sherrill, who was also being pursued by Biden, and Michigan Rep. Haley Stevens. Both flipped Republican-held House seats in 2018.

Bloomberg’s eye-popping ad spending has caught the attention of Trump, who is closely following the Democratic race. The president regularly quizzes advisers about the strengths and weaknesses of his possible opponents, according to aides.

For now, he’s relishing what he views as a deeply flawed Democratic field and a political terrain that appears to be shifting in his favor. Though he will face re-election as an impeached president, the congressional investigation and trial has only strengthened his hold on the GOP and done nothing to hurt his overall approval rating with voters.

The economy, which can be a bulwark or an anchor for a president, continues to grow. An employment report out Friday showed 225,000 jobs created in January.

Trump remains reviled by most Democrats, and many in the party believed heading into the election year that disdain for Trump would be a chief motivator for its voters. Yet the Iowa caucuses showed no sign of heightened enthusiasm.

Iowa officials predicted the turnout would rival 2008, when Obama and Hillary Clinton were competing and 238,000 people caucused in the Democratic contest. The final 2020 tally: 176,000.

“That’s a disappointment and I think all of us probably could have done a better job of bringing out our supporters,” said Sanders. He has argued that his popularity with young people could juice voter turnout in a matchup against Trump.

New Hampshire Democratic officials are predicting a large turnout in Tuesday’s primary, which could also serve as a moment for an anxious party to hit the reset button after a ragged start to the election year.

“People are understanding just how important it is to get this right,” said Maria Cardona, a member of the Democratic National Committee’s rules and bylaws committee.