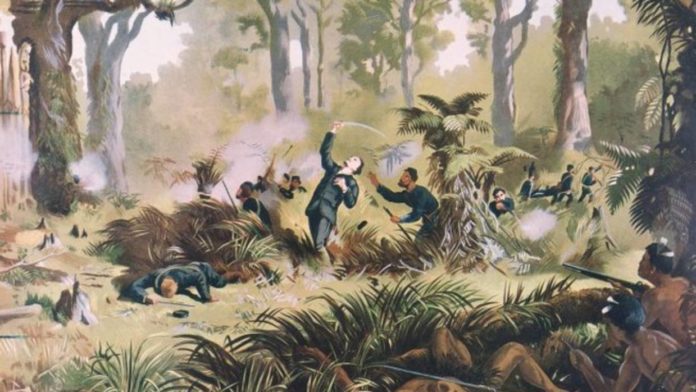 New Zealand was isolated from the rest of the world for a long time. It split from Australia 83 million years ago. Because of this, there are many plants and animals that only live in New Zealand. Before humans came to New Zealand, there were no mammals, except three species of bat and marine mammals such as seals, dolphins, and whales. Instead, New Zealand has many different kinds of bird. New Zealand has several species of flightless bird, including the kiwi. For the lizards, especially important is the Tuatara, the only living member of a whole order of reptiles.

New Zealand used to have more rare species, but some, mostly birds, were hunted to extinction early in its history. The giant Moa, Dinornis, is a famous example. The group of birds to which the Moa belongs had been in existence since the Cretaceous period. The moa became extinct about five hundred years ago. Extinctions closer to today have been caused by habitat change and introduced species like rats, dogs, and possums, which kill the native birds and lizards, or eat their eggs.

The history of New Zealand dates back approximately 700 years to when it was discovered and settled by Polynesians, who developed a distinct Māori culture. Like other Pacific cultures, Māori society was centred on kinship links and connection with the land but, unlike them, it was adapted to a cool, temperate environment rather than a warm, tropical one.

From the late 18th century, the country was regularly visited by explorers and other sailors, missionaries, traders and adventurers. In 1840 the Treaty of Waitangi was signed between the British Crown and various Māori chiefs, bringing New Zealand into the British Empire and giving Māori the same rights as British subjects. However, disputes over the differing translations of the Treaty and settler desire to acquire land from Māori led to the New Zealand Wars from 1843.

There was extensive British settlement throughout the rest of the century and into the early part of the next century. The New Zealand Wars and the imposition of a European economic and legal system led to most of New Zealand’s land passing from Māori to Pākehā (European) ownership, and most Māori subsequently became impoverished.

From the 1890s the New Zealand Parliament enacted a number of progressive initiatives, including women’s suffrage and old age pensions. After becoming a self-governing dominion with the British Empire in 1907, the country remained an enthusiastic member of the empire, and over 100,000 New Zealanders fought in World War I as part of the New Zealand Expeditionary Force. After the war, New Zealand signed the Treaty of Versailles (1919), joined the League of Nations, and pursued an independent foreign policy, while its defence was still controlled by Britain.

When World War II broke out in 1939, New Zealanders contributed to the defence of the British Empire; the country contributed some 120,000 troops. From the 1930s the economy was highly regulated and an extensive welfare state was developed. Meanwhile, Māori culture underwent a renaissance, and from the 1950s Māori began moving to the cities in large numbers. This led to the development of a Māori protest movement which in turn led to greater recognition of the Treaty of Waitangi in the late 20th century.

The country’s economy suffered in the aftermath of the 1973 global energy crisis, the loss of New Zealand’s biggest export market upon Britain’s entry to the European Economic Community, and rampant inflation. In 1984, the Fourth Labour Government was elected amid a constitutional and economic crisis. The interventionist policies of the Third National Government were replaced by “Rogernomics”, a commitment to a free market economy. Foreign policy after 1980 became more independent especially in pushing for a nuclear-free zone. Subsequent governments have generally maintained these policies, although tempering the free market ethos somewhat.