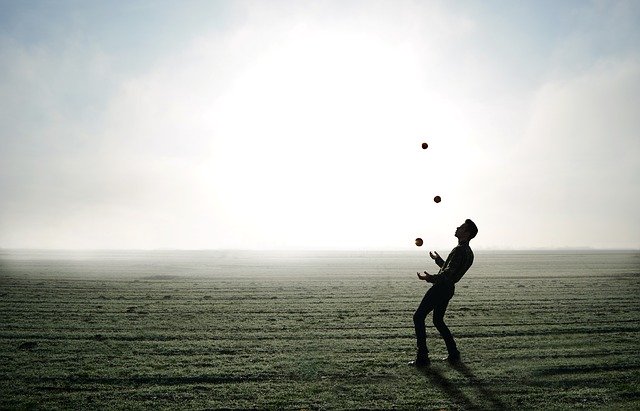 Juggling! What’s the first thing you think when you read that work? You probably think about balls, clubs, rings, torches, swords and maybe people with way too much time on their hands. You probably don’t think about religion, witchcraft or a high paying career. To understand the development of juggling one must look at its place in ancient history, the Dark/Middle Ages and modern-day society.

Historians have discovered that juggling was originally used by priestesses for religious purposes. The oldest evidence of juggling was found in the Egyptian tomb of Beni Hassan and was dated as far back as 1994 B.C. Many historians who have studied ancient jugglers believe that the women who juggled were priestesses. The priestess would juggle in conjunction with prayer to the gods. By doing this there was a greater chance of the prayerful request being granted. Priestesses would especially juggle before and during a battle, a birth and at the death of someone important. Although juggling was used for religious purposes during ancient civilization it did not remain a valued spiritual art.

Jugglers in the Dark and Middle Ages were more or less as evil as witches. Anyone who had the power to manipulate multiple balls in the air must be involved with witchcraft. Because jugglers supposedly used magic they were burned to the stake. This was so serious a problem that those who did learn to juggle were forced to join the gypsies if they wanted to perform. Because of there association with the gypsies jugglers were viewed as dishonest and cheating lowlife travelers. This didn’t look good for the jugglers, but along came the troubadours who changed everything. Troubadours, traveling poets who could also perform with music and storytelling, wanted someone to serve as an assistant and extra protection while traveling. They believed that jugglers, with their unique skills which often included more than just juggling, would be the perfect companion. In the eleventh century troubadours and jugglers began to travel together. This allowed jugglers to get into the marketplace and entertain. Jugglers who were particularly talented were even able to perform for kings and were called jesters. Although jugglers started out being persecuted they were eventually able to open the door to modern day entertainment.

Today, in the 21st century, jugglers have a known presence in every state of the US and in almost every country on the planet. The largest group of jugglers on the planet is the European Juggling Convention which attracts thousands of participants. The largest group of jugglers in America is the International Jugglers Association. The IJA has annual conventions around the US where competitions, seminars, shopping and a host of other activities take place. Despite the recession of juggling performances due to the emergence of television and the radio jugglers are still actively entertaining and are becoming more popular in American society than they used to be. Jugglers can easily earn $40 per hour at birthday parties and can earn around $2000 for entertaining on an all expenses paid cruise ship. Juggling has grown so much within the last decade that schools have begun to teach students to juggle at an early age because of certain academic and athletic benefits it provides.

Juggling is not new to the world and it has undergone many changes during the last 4000 years. It will be interesting to see how much more it will have developed during the next 4000 years.

History of Pokhara – the Land of Ponds