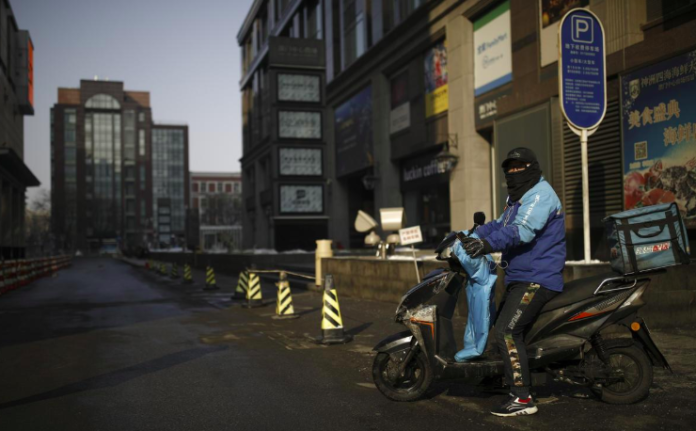 Guo Qiang, a deliveryman, knows his family is worried that he’s returned to work during the coronavirus epidemic.

The 29-year-old went back to his hometown in central China’s Henan province for the Lunar New Year, a once-a-year chance that many in China have to visit their families. When news broke about the fast-spreading coronavirus, he volunteered to return to Beijing.

“I’m not a reckless person,” he told Reuters, as he loaded his electric bicycle with groceries and checked the list of addresses in Beijing he was supposed to deliver them to.

“But how can I say it. It’s for my work, for my life, and I want to contribute to the society to realize a little self-value.”

Guo, who delivers goods for Dada-JD Daojia, an online grocery and delivery arm of JD.com, is one of thousands of workers that are keeping Chinese residents supplied as they isolate themselves at home. The authorities have ordered people to stay indoors and away from crowded, public areas.

The coronavirus, which started in Wuhan city in central Hebei province in December, has killed more than 800 people and infected over 37,000 in China.

Many migrant workers like Guo had already made the long trek home to see their families, but companies recalled workers, urging them to serve their communities and offering to triple their salaries.

To assuage the anxieties felt by customers, firms such as Yum China’s fried chicken chain KFC, Alibaba Holdings’ Ele.me, Meituan Dianping and JD.com have rolled out no-touching “contactless delivery,” and some meal deliveries come with notes detailing the temperature readings of the workers who prepared and delivered the food.

“I have to say I’m indeed worried,” said Guo, when asked about how he felt about his own safety.

“Sometimes I’m nervous even if I have a little cough. That’s why I have a thermometer at home and, sometimes when I come back, I’ll check my body temperature.”

While the coronavirus outbreak has hit sectors such as hospitality and tourism hard, it has shored up demand for mobile and online firms, such as short video apps and games as well as for meal and grocery delivery firms.

Most of those staying at home have been focused on buying the essentials. JD.com said the sales of vegetables, eggs and rice by its supermarket chain 7Fresh each surged on average by about 300% during this period compared with last year’s Spring Festival.

China will sputter towards normal on Monday after holiday extensions authorities made to the Lunar New Year holiday end, but many shops are expected to still remain shut with workers being asked to work from home. Huge Chinese cities, including Beijing and Shanghai, currently look like ghost towns.

Guo says that he feels the echoes of the city’s empty streets on his long drives.

“It really feels like a deserted city. It is completely different from the look of a usual Beijing,” he said.