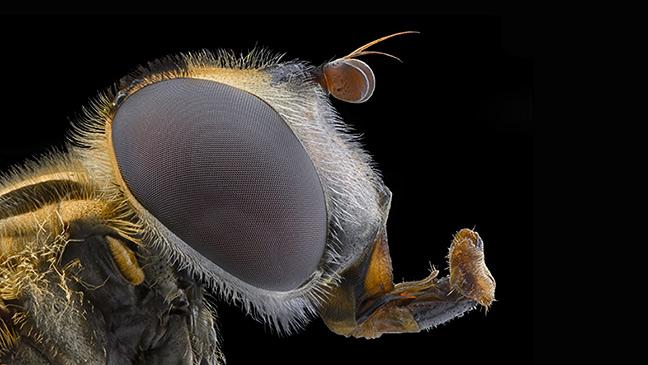 There are about a million species of insect and many more yet to be discovered. They include, for example, ants, bees, wasps, beetles, butterflies, dragonflies and fleas. They range in size from microscopic soil-dwelling insects to large beetles and butterflies but they all share certain common features.

Their bodies are divided into about 20 segments which are grouped into the head (6 fused segments), the thorax (3 segments) and the abdomen (11 segments). All insects have an exoskeleton consisting of a firm cuticle.

The head bears sensory organs and mouthparts. There is a pair of antennae which are sensitive to touch and to smell. There is also a pair of compound eyes made up of hundreds of separate lenses and sensory cells. These can detect light, movement and colour and can form crude images of shapes. In bees and butterflies these senses allow the insect to find sources of nectar in flowers by their colour, shape and smell.

There are three sets of mouthparts carried externally on the head. A pair of mandibles (jaws) bites off portions of food and passes them into the mouth. A pair of maxillae help taste and manipulate the food and the labium (lower ‘lip’) has a variety of functions depending on the species of insect.

All insects have three pairs of legs, one pair on each thoracic segment. There are five sections to each leg with joints between each section which give the leg the ability to move in different directions. The exoskeleton at the joints consists of a flexible cuticle which allow freedom of movement.

Also on each of the second and third segments of the thorax there is, typically, a pair of wings though in some insects (e.g. flies and mosquitoes) these may be reduced to one pair and a number of species have no wings at all.

In the mature insect the abdomen carries no appendages other than some apparatus on the final segment to assist with egg-laying.

The firm exoskeleton supports the insect, maintains its shape and protects it from damage and from evaporation. The rigid exoskeleton prevents insects from growing in a continuous manner and growth takes place in spurts. The outer layer of cuticle is shed and the insect expands its body until the new layer of cuticle forms and hardens. This moulting process (or ecdysis) takes place 5 times or more until the mature insect appears, after which there is no further growth or ecdysis.

The intermittent growth takes place in the larval or nymphal stages of an insect’s life cycle. Insects such as butterflies or bees, which exhibit complete metamorphosis, have larval stages quite unlike the adult e.g. fly maggots or butterfly caterpillars. The penultimate moult results in a quiescent stage, the pupa, in which the adult features are formed. The final moult reveals the mature insect.

In insects such as the cockroach or grasshopper, which have incomplete metamorphosis, the early stages are called nymphs and they closely resemble the adult except that their wings have not formed. Small changes of form take place at each ecdysis until the mature winged insect emerges.