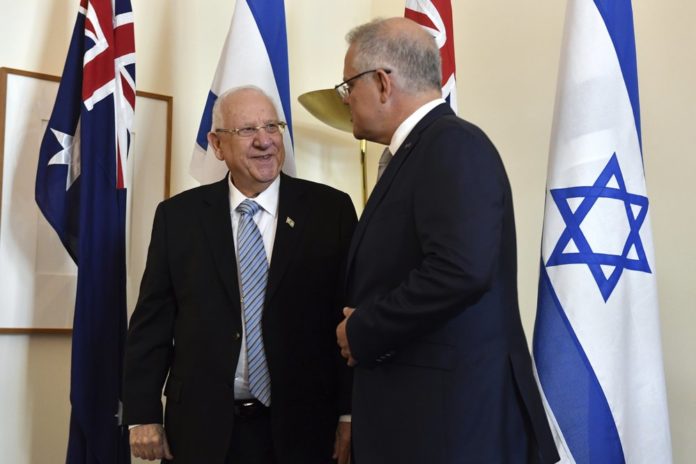 Australia’s prime minister and Israel’s president on Wednesday discussed an extradition request for a former school principal whose alleged abuse of dozens of Australian schoolgirls has cast a shadow over the Israeli leader’s visit.

Prime Minister Scott Morrison and President Reuven Rivlin discussed their “strong commitment to seeing justice” in the case of the former principal, Malka Leifer, during a meeting at Parliament House, officials said.

An opposition lawmaker said Rivlin had offered to personally intervene in the case if progress is not made in court this week.

Leifer has been fighting extradition from Israel for six years and the legal wrangle to bring her before an Australian court has caused a diplomatic strain between the allies.

Rivlin has been criticized for declining an invitation to meet three of the alleged victims during his visit this week to the Australian city of Melbourne, where Leifer was the principal of an ultra-Orthodox Jewish school until 2008.

The Associated Press does not usually identify alleged victims of sexual abuse, but the siblings have spoken publicly about their allegations.

“I was pleased that President Rivlin advised me that if hearings scheduled this week do not see this matter progress towards Malka Leifer being extradited to Australia, he will personally meet with the Chief Justice of Israel to discuss how this matter can be expedited,” Burns said in a statement, referring to President of the Supreme Court of Israel Esther Hayut, who is also known colloquially as the chief justice.

“This matter has dragged on far too long. These victims deserve justice and I will continue to fight until Malka Leifer is back in Australia facing trial,” Burns added.

Rivlin’s office did not immediately respond to a request for details of any undertakings regarding the case he had given during his visit to Australia.

Erlich wrote in a letter to Rivlin through the Israeli Embassy in Australia after the president declined to meet the siblings, “We did not wish to ask you to interfere with the judicial process, only that you use your authority to ensure this case ends in a timely manner.”

“Sadly, the president has underestimated the importance of this case to the Jewish and wider Australian community and the supportive encouragement that such a meeting would produce,” she added.

Manny Waks, Melbourne-based chief executive of Kol v’Oz, a Jewish organization that combats child sex abuse, said it was “regrettable” that the president could not find time to meet the sisters while in Melbourne.

“It seems President Rivlin has his priorities wrong on this trip,” Waks told The Australian newspaper.

Neither Morrison nor Rivlin mentioned the case during brief public comments they made in Canberra, Australia’s capital, before their bilateral meeting.

Morrison praised the “stridency of the judiciary” in Israel as one of the “great principles and values that underpin freedom” for which Israel stands.

Rivlin described Australia as a “beacon” that helped the world understand Israel’s position. He praised Australia’s decision in December to oppose an International Criminal Court investigation into alleged Israeli war crimes against Palestinians.

Dozens of pro-Palestinians demonstrators rallied outside Parliament House before the meeting, carrying signs including, “Israel is not above the law.”

On Leifer, Rivlin told Australian Jewish News in a recent interview that he was “confident that Israel does not allow those who have committed crimes to avoid justice.”

“I understand how painful and difficult the case of Malka Leifer is for the Australian Jewish community and for Australians generally,” he said.

“The professional opinion of the Ministry of Foreign Affairs, the Ministry of Justice and the State Prosecutor’s Office is that the extradition should be carried out as soon as possible and are doing everything possible to expedite it,” Rivlin added.

Australia requested Leifer’s extradition in 2014 on 74 charges of child sex abuse and more than 60 Israeli court hearings have followed.

The Jerusalem District Court last month granted Leifer’s attorneys’ request to review a psychiatrists’ ruling that she is fit to stand trial for extradition.

A date for a vote on the motion has yet to be set, but it is expected to be carried with the major parties’ support.