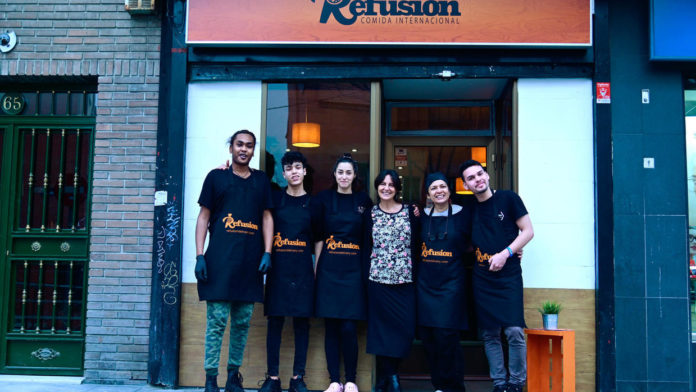 Hala and Alex learned to cook with their mothers, Yoli learnt while preparing meals for her large family.

The trio, who were forced to flee Syria, Sudan and Venezuela respectively, are now the chefs at a unique Madrid restaurant that aims to change the lives of refugees and alter how people see them, at a time when the arrival of large numbers of migrants fleeing poverty and prosecution stokes tensions across Europe.

Gathered in the kitchen wearing black aprons bearing the name of the restaurant, “Refusion”, in large orange letters, the three prepare typical dishes from their native countries: moussaka from Syria, kafta from Sudan and tequeños from Venezuela.

Each came to Spain for different reasons — Hala Doudieh, 29, because of the war in Syria, Alex Medina, 24, to live freely as a transsexual and Yoli Medina, 52, because of the economic crisis in Venezuela — and the eatery provides them with stable work which has improved their lives in their new home.

“I am a black trans refugee woman, it’s hard to find work, I made food, sold falafels on the street to survive,” Alex, who sports long black hair in braids and was named Ahmed Mohamed at birth, told AFP.

Alex, who learned to cook with her mother in Khartoum, fled Sudan three years ago because she feared for her life due to her identity.

She said she was “happy and comfortable” at the restaurant in the northeastern Madrid neighbourhood of Valdeacederas which has a high immigrant population.

“I can work and dress however I want and prepare food with love and affection,” she added.

Refusion was set up by “people who want to offer stable work to people who are not stable economically, sociologically or socially, people who want to give an opportunity to refugees who like working in the kitchen,” said Doudieh, who arrived in Spain with her family from war-torn Damascus in 2013.

She was referring to the five founding members of the restaurant, which opened its doors last year with the aim of expanding to employ more refugees.

The founding partners are all volunteers at the charity “Madrid for Refugees”, which helps recent arrivals integrate in Spain.

It organises evening courses where a refugee teaches people how to make food from their country. The three chefs from Refusion have all given these classes.

“That is the project, to try to provide stable work to people who have had very complicated histories and allow them to integrate because our state gives them refugee status but then doesn’t help them, or does little, to integrate them,” said one of the Spanish founders of the charity, Elena Suarez.

She said the goal is to “use food to change a bit the negative discourse we have about refugees” in Spain, which receives the most asylum requests in the European Union after Germany and France according to the bloc’s statistics agency Eurostat.

“We won’t be intimidated by what is happening and by new parties,” she added in a reference to far-right anti-immigrant party Vox which became the third-biggest party in Spain’s parliament in a November 2019 general election.

Since then the handful of tables at the restaurant, which is decorated with a big map of the world with flags from the countries its customers hail from, is often full and its three chefs struggle to fill the home delivery orders.

Paula Lajarain, a 26-year-old tattoo artist who often goes to the restaurant with her father, described the venue as “super cool”.

“Seeing that they are getting ahead, that people like the place a lot, makes me really happy, and the food is very good,” she said as she waited for her falafel order to be made by Doudieh.

The Syrian chef was helped by two new assistants — a 22-year-old Venezuelan who arrived in Spain in October and a 19-year-old Moroccan who smuggled himself into Spain’s North African enclave of Ceuta hidden under a bus.

“For me entering this collective has been a blessing,” said Medina, who learned to cook by preparing Sunday lunch for her large family in northern Venezuela.