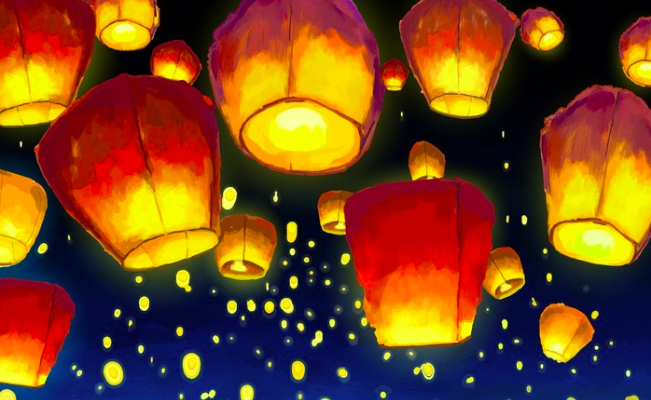 From Thailand to Hawaii

The origin of Floating Sky Lanterns can be traced back to thousands of years in China, when these illuminating floating objects were not only a source of light, but also essayed the role of passing on military signals across distances. Today lanterns hold more of a celebratory significance, as opposed to their cultural essence in olden times. Mesmerising lantern festivals today find their roots in meaningful traditions, all over the world.

Every year on Memorial Day, on the South Shore of Oahu, thousands of residents and visitors release floating lanterns into the water together, to honour and revel in the memories of their deceased loved ones. This festival and event is called “Lantern Floating Hawaii“. The island’s first festival, hosted by Shinnyo-en, an international Buddhist community, took place in 1999 at Keehi Lagoon. But since 2002, the festival has been held at Ala Moana Beach, a sandy stretch between Waikiki and downtown Honolulu. The ceremony begins with traditional performances by local musical groups, a prayer led by the head of the Shinnyo-en community – Her Holiness Shinso Ito, follows. Then, the lanterns are released into the Pacific Ocean – with the thought of inspiring remembrance, good fortune and hope, as the sun sets.

In Buddhist culture, releasing a floating lantern into the sky represents optimism and new beginnings. Accordingly, the full moon is considered to be an ideal time to meditate, reflect, observe rituals, and honour deceased ancestors. The “Full Moon Lantern Festival” in Hoi An is held on the 14th day of the lunar calendar every month. At sunset, homes and offices across the city turn off their electricity to allow lantern lights to illuminate the area. Locals and visitors can release lanterns onto the river as well – an act that is believed to bring happiness and health.

The “Yi Peng Festival” is celebrated across northern Thailand, but the biggest ceremony takes place in Chiang Mai each year. The idea behind this traditional festival stems from the belief that a person’s soul can be cleansed and their misfortune can be reversed by sending an offering to Buddha in the sky. The event occurs on a full moon day during the 2nd month of the Lanna Lunar Calendar (12th month of Thai Lunar Calendar). Thousands of lanterns made of rice paper, called khom loi, are released into the sky. This lantern ceremony of spiritual importance used to be for monks only, but today tourists can partake in the festivities by buying expensive entry tickets, sold through tourism agencies, that typically cost $300.

The “Loi Krathong” is a traditional festival celebrated widely across Thailand. It also happens to coincide with the “Yi Peng” Festival. Both the annual events are touted to be “festivals of light,” but Loi Krathong revolves around releasing a krathong – a basket traditionally made out of a banana stalk and stocked with candles and incense – across a water body, as opposed to sending lanterns into the sky. Loi Krathong lasts for one night on the full moon of the 12th month of the traditional Thai calendar. The most popular celebrations take place in Bangkok and Sukhothai, but travellers in Chiang Mai for the Yi Peng Festival would also have the chance to celebrate Loi Krathong with the population of Thailand.

The “Pingxi Sky Lantern Festival” is held annually in Taiwan’s Pingxi District, an area surrounded by mountains, around 1 hour away from Taipei. This festival marks the First Full Moon of every Lunar New Year during February or March. Lanterns are released in the rural regions of Jington, Pingxi, and Shifen (the festival’s largest event takes place in Shifen). During the festival, thousands of people flock to scribble their wishes on colourful paper lanterns, before releasing them into the sky, with a hope that their prayers would be answered. The release of lanterns also commemorates the official end of the Chinese New Year and is considered to be a symbol of embracing an optimistic future.

The “Spring Lantern Festival” in China takes place annually and can be traced back to 2,000 years ago when an Eastern Han Dynasty Emperor had issued an official command stating that all temples, households, and royal palaces are supposed to light lanterns on the 15th day of the first Chinese Lunar Month to show respect to Buddha. Today, the festival only marks the end of the Chinese New Year and celebrates family, society, and the coming of spring. Although some customs vary regionally, the most prevalent activities involve lighting lanterns, guessing riddles, eating tangyuan (ball-shaped dumplings), and watching traditional lion dance performances. China’s largest Spring Lantern Festival celebration takes place in Nanjing, capital of the Eastern Jiangsu province, but events are also held in cities such as Shanghai and Beijing, along with widespread participation in rural regions.