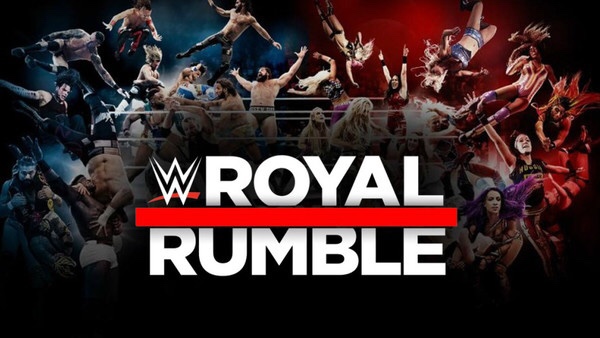 Welcome to the WWE Royal Rumble pre-show, and we are live on the WWE Network.

Welcome to the Royal Rumble PPV! We get an intro video package to hype the matches that will be taking place tonight. Our opening contest is…

A brawl broke outside of the ring to kick things off. Back in the ring, Reigns tried to get some quick pin attempts. Corbin blocked the Superman Punch and ended up hitting Deep Six for 2. They brawled into the crowd and then back to ringside where Corbin sent Reigns through an announce table. Reigns hit two samoan drops to Corbin through two tables. Reigns sent Corbin into a box of equipment. All of a sudden, Robert Roode and Dolph Ziggler attacked Reigns from behind. The Usos ran down to make the save. Jey Usos took out Ziggler and Roode with a dive off a scaffold. Reigns put Corbin in a portable toilet and pushed it over. It was empty, no fluids. To the dug out they go. Corbin hit Reigns in the gut and back with a steel chair. Reigns hit a spear to Corbin for the win.

Alexa Bliss and Bianca Belair starts things off. Molly Holly is out at #3 and Nikki Cross following. They did some tag team wrestling. Lana was next, who cut a promo about herself. Mercedes Martinez enters at #6. Liv Morgan followed and speared Lana off the apron for the elimination. Moments later, Lana pulled Morgan off the top rope for the elimination. Mandy Rose is out at #8 and Candice LeRae at #9. Rose was almost eliminated by before she touched the floor, Otis rolled out from under the ring to save her. Sonya Deville was next followed by Kairi Sane and Mia Yim. Cross got eliminated by Belair Deville nearly knocked out Rose but Otis caught her. Belair suplexed Deville onto them and they were both eliminated. Dana Brooke at #13. Belair eliminated LeRae. Sane was eliminated by Bliss. Tamina was next but was eliminated right away by Belair. Out next was Dakota Kai. Yim was also eliminated. Chelsea Green was out at #16 and eliminated Kai right away. However, Bliss then eliminated Green. Belair speared Brooke off the apron for the elimination. Charlotte Flair was out at #17 and Naomi followed. Beth Phoenix out at #19 and Toni Storm followed. Belair was eliminated by Flair. Kelly Kelly made her entrance and followed by Sarah Logan. Flair eliminated Logan with a big boot and a right hand to Kelly Kelly. Natalya entered at #23. Xia Li was next. Zelina Vega was #25. Shotzi Blackheart was out. Naomi was almost eliminated by saved herself on the barricade. Carmella was out. Flair was nearly eliminated when she went shoulder first into the ring post but fell through the middle rope. At #28, Tegan Knox. Santina Marella, Santino, was out at #29. Finally, Shayna Baszler was the #30 entrant. Baszler eliminated Li then Nox, and Vega, and Blackheart. Moments later, Baszler eliminated Carmella and Storm and Naomi. Our final four is Baszler, Natalya, Phoenix, and Flair. Phoenix eliminated Natalya then Baszler eliminated Natalya. The final two were Flair and Baszler. Flair tossed out Baszler for the win.

They started brawling then Bayley sold a knee injury but faked it to get a cheap shot and allowed her to get some offense. They fought back and forth. After a few moments of Balye getting the offense, she taunted Evans and missed a crossbody off the top rope. Evans made a comeback with a series of strikes. Evans hit a neck breaker then went for a dive off the top rope but Bayley put her knees up and rolled her up for the win.

They started to brawl to start things off. Bryan tossed him to the floor and went for an outside dive but Wyatt sent him into the barricade. Back into the ring, Wyatt started the beatdown and whipped him a few times with the strap. Bryan made a brief comeback but was taken out by Wyatt then sent him into the steel steps.

Bryan hit him with a flying knee strike off the apron but Wyatt then took him out with a clothesline. They got on the announce table but Bryan hit several low blows. Bryan then hit him a few times with the strap. Bryan with the yes kicks and strap slaps.

Bryan went for the running knee but Wyatt caught him with Sister Abigail for the win. Bryan had a triangle choke while Wyatt had the mandible claw. Wyatt got out of it while holding onto the claw but Bryan transitioned into the lebell lock with the strap but Wyatt out of it. Bryan hit the running knee for 2. Wyatt with the mandible claw for the win.

It was a slow start with Asuka getting the early attack. Lynch hit her with a missile drop kick but Lynch blocked a hip attack. Lynch with a series of kicks. They brawled on the apron until Lynch connected with a front suplex to the floor.

Lynch with a leg drop off the top rope for a near fall. Asuka caught her with a knee strike to the face then several punches. Asuka with a powerslam for 2. Lynch fought back and went for a dive but Asuka caught her with a knee strike then transitioned into an armbar but Lynch got the bottom rope. Asuka with a german suplex then a series of head kicks.

It was noted on commentary that Bobby Lashley and Rusev were removed from the match because they got into a parking lot brawl earlier in the day. Brock Lesnar and Elias start things out. Elias was singing and mocking Lesnar and Heyman. Lesnar ran after him and attacked him. Elias was then eliminated. Erick Rowan was next and eliminated right away. Robert Roode out at #4 and eliminated. Next is John Morrison and was suplexed over the top rope. Kofi Kingston out next for his revenge. Kofi with a series of strikes but received a german suplex. Rey Mysterio dressed as Batman was next followed by Big E. The three babyfaces went after Lesnar. After selling some of their moves, Lesnar tossed Mysterio over and then clotheslined Big E over and finally Kingston. Cesaro was next and landed some uppercuts but Lesnar tossed him out despite this. Shelton Benjamin is #10. They hugged it out and Lesnar acted like they were waiting on the next star but turned on him and tossed him out. Shinsuke Nakamura is next and got some offense before getting tossed out. MVP made a surprise entry and Lesnar was dancing to his theme music. Lesnar hit an F5 then was eliminated. At #13, it with Keith Lee, who knocked down Lesnar twice with shoulder blocks and then they did a double clothesline spot. Braun Strowman followed and cleaned house. Moments later, Lesnar eliminated Lee and Strowman when they were battling. #15, Ricochet and Drew McIntyre at #16. Ricochet hit a low blow to Lesnar then McIntyre hit a Claymore Kick to Lesnar for the elimination. McIntyre tossed Ricochet over the top rope for the elimination. At #17, The Miz and was quickly tossed out. AJ Styles followed and then Dolph Ziggler. Karl Anderson at #20. EDGE made his return at #21. Edge hit two spears as the crowd went nuts. Baron Corbin followed. Edge eliminated Styles. Matt Riddle was out at #23 but quickly eliminated by Corbin. Luke Gallows followed. McIntyre eliminated Corbin. Randy Orton was next. Orton and Edge eliminated Anderson and Gallows. Roman Reigns was next and eliminated Ziggler with a spear. At #27, Kevin Owens and #28, Aleister Black. #29 was Samoa Joe and Seth Rollins at #30. A brawl broke outside of the ring with Rollins, AOP, and Murphy. They attacked the remaining stars. Black was tossed out by Rollins. Owens tried to eliminate Rollins but AOP caught him. AOP eliminated Owens. Rollins eliminated Joe. The final five include Rollins, McIntyre, Reigns, Orton, and Edge. The faces tossed out Rollins. Edge and Orton hit a double RKO. Edge tossed out Orton after Orton almost eliminated him. Edge hit a spear to Reigns and nearly eliminated him. Reigns tossed out Edge after fighting on the apron. We’re down to McIntyre and Reigns. McIntyre hit the Claymore Kick to Reigns and won the match.