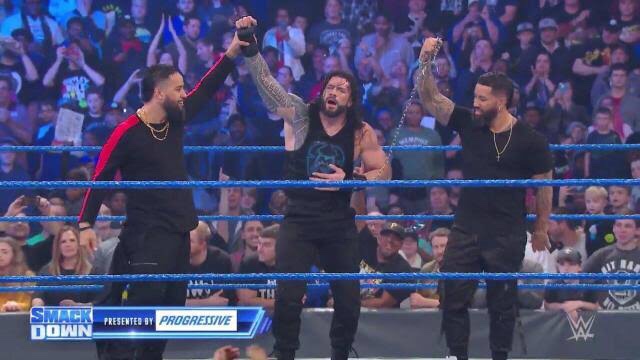 Here are the full results for the first SmackDown of 2020.

We start with a recap of last week’s main event.

Daniel Bryan is putting wrist tape on and is approached by The Miz backstage. Bryan asks what’s up and Miz says that he needs to avenge what The Fiend did to his family, and he’s going to take away everything he cares about. But he respects Bryan defeating him last week. He begs Bryan to defeat The Fiend at the Rumble for everyone.

Bayley and Sasha arrive and gloat about the change they’ve made to SmackDown’s women’s division. Lacey Evans comes out and says that her New Year’s resolution is to prove that bad guys can be taken down with the odds stacked. Alexa Bliss comes out and wonders if Bliss and Cross even belong in the match since the beef is between Lacey and Sasha/Bayley. Cross says if they want to get the tag titles back, a win here would help them. Bliss agrees.

Sasha Banks and Bayley vs. Alexa Bliss and Nikki Cross vs. Lacey Evans and Dana Brooke

Lacey Evans is able to get the Woman’s Right onto Banks, and Brooke tags her from behind, pinning Banks with a top rope senton.

Mandy approaches Otis and asks if his mom anything special for the holidays. Otis tells Mandy to ask Dolph Ziggler. She asks if he saw what happened last week, and Otis says his mother did. Tucker comes and tells Otis to focus for their match, and he gives a stare to Rose.

The Miz is walking backstage and is approached by The New Day with pancakes. Miz says he’s not in the mood. Big E said he watched the balls drop for New Year’s. Kofi reminds Miz about the great decade that he’s had, and that losing last week’s match isn’t the end of the world. Kofi wants Miz to vow to win more titles in this next decade. Miz says it’s not about titles, but about The Fiend violating the sanctity of his family.

He gets serious and says that he wants to start 2020 with a fight. He knocks the tray of pancakes down. Kofi senses he wants to fight, and he accepts the challenge. Miz wishes them Happy New Year.

Elias is out and sings about his new year’s resolutions and the Royal Rumble while taking shots at Shane McMahon, Baron Corbin, Sami Zayn and Dolph Ziggler.

A pre-taped segment of The Revival in the locker room airs and they tell each other SmackDown needs to respect them in 2020. They are approached by Shorty G, and he says he shouldn’t let Elias’ words bother them. Shorty G reminds them that he embraced who he is and it was the best decision he made. Dash Wilder congratulates Shorty on graduating from New Year’s baby to motivational speaker. Shorty G says the short jokes don’t work anymore and he can do anything. Wilder says everything except beat them. Shorty makes the challenge to Wilder and it’s accepted.

After the match, Scott Dawson jumps Shorty and they hit the Shatter Machine. They continue the assault before Sheamus returns. The Revival retreat and Sheamus hits the Brogue Kick on Shorty G.

Kofi Kingston vs. The Miz

Kofi counters a Skull Crushing Finale from The Miz and pins him from out of nowhere for the victory.

After the match, The Miz ambushes him from behind before Big E runs into the save him. Miz retreats. Miz tells the crowd he’s given them everything.

Daniel Bryan and Roman Reigns are interviewed backstage. Bryan is asked about his match against The Fiend. Bryan references Miz mentally deteriorating. But he says he’s unbreakable and hasn’t changed facing The Fiend. He’ll prove it by winning Universal Champion. Roman says it’s perfect, because he’s entering the Rumble and he plans to become Universal Champion once again, especially since he never lost the title. Reigns warns Bryan to be ready.

Bryan asks if Roman is trying to fire him up, because if so, he’ll be double ready at WrestleMania. But he also tells Roman to be ready for their tag match tonight. Roman says the only ones not ready are Ziggler and Corbin.

Cathy Kelley approaches The Miz’s locker room, but John Morrison answers the door. She asks if she can get a word with Miz, but Morrison says there’s nothing left for The Miz to say.

Before the match, Drew Gulak says there’s no way Mandy Rose would ever date him because he doesn’t have the physique or the brains. He says it looks like Otis is leaking butter. Drew has a Powerpoint Presentation prepared on reasons why Mandy would never date Otis.

During their match, Ziggler tells Mandy Rose everyone makes mistakes and apologizes. Otis defeats Gulak with a second rope splash.

Cesaro goes for the Neutralizer, but Strowman is able to power out and get the powerslam for the win.

After the match, Nakamura takes Strowman out from behind with the Kinsasha.

Lacey Evans vs. Sasha Banks is confirmed for next week.

During the match, The Fiend appears at ringside when Daniel Bryan is all alone in the ring. Bryan hits a Suicide Dive on The Fiend and takes the fight outside. Bryan goes for a running knee onto the outside, but The Fiend gets The Claw and sends Bryan through the barricade. he gets the Claw in again, and Bryan is down. The Fiend stands tall and the lights go out. The lights come back on and The Fiend is gone. Backstage personnel come to check on Bryan.