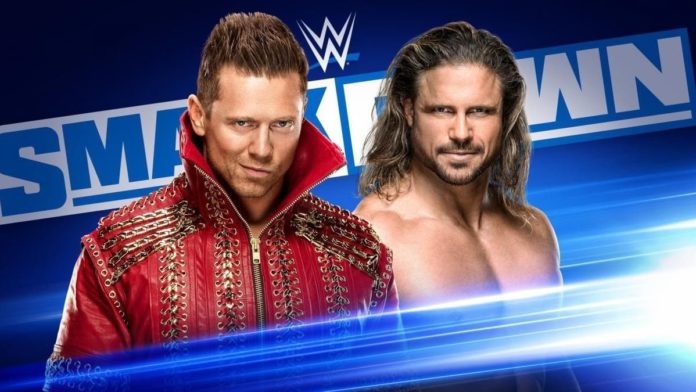 Here are the full results for the January 10, 2020 edition of SmackDown.

Miz comes out for Miz TV. He says that he let the emotions and temper get the best of him, and he apologizes to Kofi Kingston for his attack. He talks about the bad month he’s had, but he addresses John Morrison’s return.

Morrison comes out and Miz reminds Morrison’s accomplishments. We get a highlight reel of Morrison’s career. John says he saw what Miz was going through and being there for a friend was important. After last week, Morrison realized that he’s disappointed in the fans.

He chastises the crowd for saying Miz sucks after a bad day, and claims Miz has worked harder than any superstar for 15 years. He then starts pointing out people in the ring. New Day comes out.

Kofi asks Miz who he’s trying to fool, and Big E isn’t buying Miz’s apology because he isn’t a good actor. Kofi said he would have bought it if Miz simply said he had a bad day, and he would have respected that.

Miz says he respected Kofi’s six month WWE Title reign and the six seconds he took to lose it, and that he hasn’t pursued it since. Kofi tells Miz he’s changed from cool Miz to obnoxious Miz and that he sucks.

The Miz vs. Kofi Kingston

John Morrison takes out Big E on the outside and Miz takes advantage of the distraction with the Skull Crushing Finale for the win.

We get Firefly Fun House. Bray says he loves us, and he says whatever the opposite of love is, that’s how “he” feels about Daniel Bryan. He says he’s been naughty and that he’s in trouble at the Rumble.

All he wanted was for Bryan to remember and brief snippets of Bryan joining the Wyatt Family six years ago plays. Then he says he wanted to change him, and now he wants to hurt him.

Sonya Deville is talking to Mandy Rose and says she’ll be in her corner tonight. Rose seems distracted by something, but says she needs to take care of something first. Deville leaves her alone and Rose has a big white box.

Elias comes out and sings about the Royal Rumble.

Otis is backstage and Tucket tells him he has to let it go. Mandy Rose comes out and apologizes for letting Ziggler step on his cake. Rose gives Otis a cake that says she’s sorry. She leaves him with it.

During the match, Otis comes out eating the cake and distracts Alexa which allows Mandy to cover her from behind.

The match doesn’t start and Sasha doesn’t come out. Bayley appears on the screen and says Sasha is in Los Angeles finishing her rap album.

Lacey challenges Bayley to a title match and Bayley declines. Lacey rushes to the back. She approaches Bayley’s locker room, and Bayley attacks her from behind. But Lacey fights back and runs away just as she’s about to hit the Woman’s Right.

Daniel Bryan is backstage and says that The Fiend changed Bryan for the better and that he knows The Fiend can be hurt. The monitor behind him shows Firefly Fun House. The bunny tells Bryan is that The Fiend is beatable and tells him the secret, but Bray covers his mouth and says snitches get stitches. Let him in.

Nakamura attempts to hit Braun with the title, but he dodges and hits the Running Powerslam for the win.

After the match, Strowman poses with the title before Sami swipes it from behind and escapes.

We get a Sheamus promo addressing his attack on Shorty G. He says being small isn’t to be embraced, but to be exterminated, crushed and disposed of.

Roman Reigns said he needed help from family and not friends. He says 2020 is Roman’s year and that he’ll main event WrestleMania for the fifth time, and he’ll do that with The Usos.

The Usos vs. King Corbin and Dolph Ziggler

Roman Reigns spears Corbin on the outside after Corbin attacks him for the DQ.

After the match, Roman continues the assault before Robert Roode returns and attacks Roman from behind. Corbin hits a Deep Six to Jimmy and Ziggler hits a super kick onto Jey. Robert spinebusters Roman on the table and Ziggler elbows him through it. Roode, Ziggler and Corbin stand tall as SmackDown goes off the air.