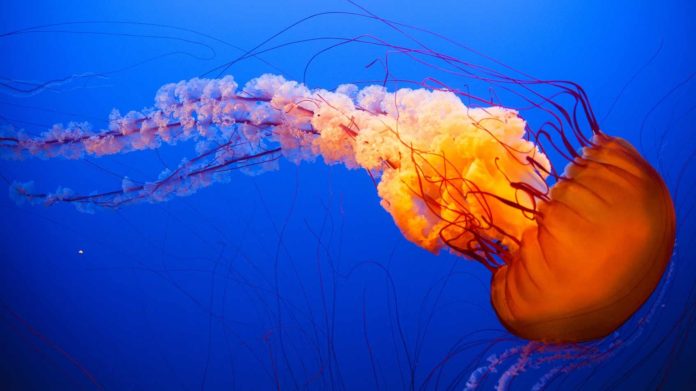 Jellyfish are gelatinous zooplankton from the Phylum Cnidaria. From an anatomical standpoint they are little more than a sac within a sac. Their body composition is 95% water. They do not have a brain, or even a central nervous system. They lack anything that remotely resembles a skeletal system. Most jellyfish do not even have eyes.

Aside from eating, their only interaction with their immediate surroundings is the ability to distinguish between up and down, light from dark, or physical contact. Yet somehow their light sensory abilities allow them to perceive and maneuver around foreign objects.

Jellyfish are one of the oldest non-extinct life forms in existence. This should come as little surprise considering they are just one step up the evolutionary ladder from single cell organisms.

Jellyfish fossils have been unearthed dating as far back as the Cambrian Period some 600 million years ago. The Cambrian Period predates not only the extinction of dinosaurs but their existence itself. These mysterious creatures will probably be swimming the Earth’s oceans long after mankind is gone.

The largest known jellyfish species is the Arctic lion’s main jellyfish followed closely by Nomura’s jellyfish off the coasts of China and Japan.

The largest lion’s mane ever officially documented washed up on the shoreline of Massachusetts Bay in 1870. Its bell measured 7.5 feet (2.28 meters) in diameter and its tentacles stretched to a length of 120 feet (36.5 meters). There have been claims of larger jellyfish being discovered since then but none have been officially documented.