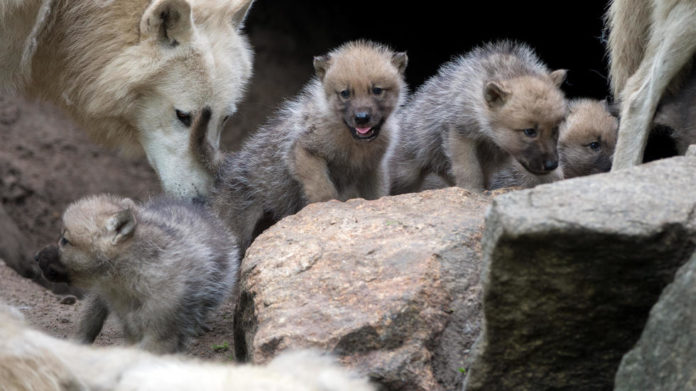 It’s a game familiar to most people: you throw an object a short distance, and wait as your joyful canine companion leaps to intercept and return the missile, encouraged by words of praise or a pat on the head.

Such scenes have no doubt played out over millenia, symbolizing the unshakeable bond of friendship between humanity and our “best friends” ever since dogs were domesticated from their wolf ancestors at least 15,000 years ago.

But a new study in the journal iScience shows that some wolf puppies also know how to play fetch, upending the long-held hypothesis that the ability to interpret subtle human social cues is unique to dogs and arose as a result of selective breeding.

The finding was made by chance as researchers in Sweden subjected 13 wolf puppies born to three different litters to a series of behavioral tests.

The team was raising wolf and dog puppies from the age of 10 days old in order to answer fundamental questions about how the two species differ, and what they have in common.

It wasn’t until the third year of the program that lead author Christina Hansen Wheat, a behavioral ecologist at the University of Stockholm noticed that some eight-week-old wolf pups actually paid attention to a stranger throwing a ball and asking them to return it — despite no prior training.

“When I saw the first wolf pup fetch the ball, I got goosebumps — whoa, that’s unexpected,” she told AFP. “Then I had two more doing the same thing, and so that was pretty exciting.”

The pups were subjected to consecutive videotaped trials, with a total of three of the 13 showing the ability to play the game consistently, all from the third litter.

This suggests that, while rare, variation among wolves in so-called “human directed behavior” was a key factor in which ones were selected by prehistoric people for further breeding.

Hansen Wheat believes the finding adds an intriguing “new piece to the puzzle” to the story of dog domestication, one of the oldest and most significant interspecies partnerships in human history, yet a deeply contested area of study.

Scientists disagree over everything from when exactly it took place to where, what conditions led to it, and how it first happened: Did a stray gray wolf approach a human camp for scraps? Or did our hunter gatherer ancestors kidnap a group of pups?

Recent years have seen researchers focus on the genetic differences between dogs and wolves to try to tease out which markers are responsible for different traits.

But Hansen Wheat said her study showed that very large numbers of wolves would need to be tested to identify the gene or genes responsible for behavioral differences, since a particular trait may be absent in most wolves but present in a few.