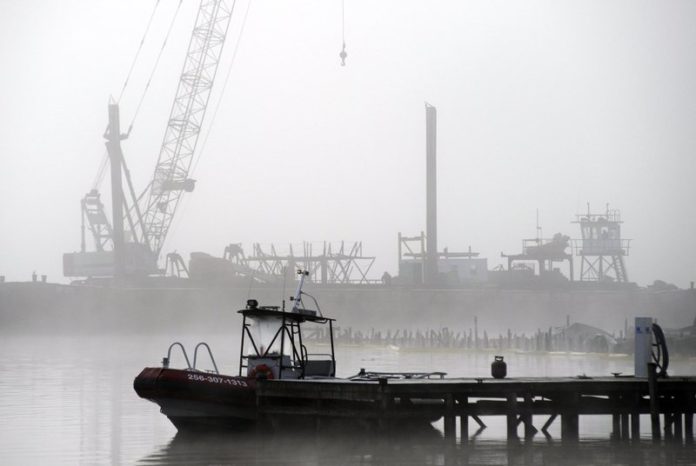 Roughly two dozen people lived on Dock B at Jackson County Park Marina, and none was rich or famous. They were middle-class adults and children, not yachters, folks who liked having a Tennessee River bywater for their backyard.

A fire that engulfed the wooden dock and destroyed about 35 boats, killing eight people who lived at the marina, transformed a comfortable, scenic spot into a place of mourning.

Tommy Jones, who lived on a 35-foot (11-meter) boat on the dock, helped others flee and swam to safety but lost his brother, who drowned trying to escape. He struggled to stay composed while talking about the awful scene.

Julie Jackson, who lives in a boat on another dock, can’t shake the sounds of people crying for help as the sky glowed orange from the flames.

“I don’t ever want to see anything like that again in my life,” she said.

David Kennamer has run a store at the marina for about two years, selling fishing gear and shaved ice treats to kids. The deaths were incredibly saddening, he said.

“The rich folks would be in a bigger, nicer houseboat somewhere. These were just average people like me and you that love boating, staying on the water,” he said. “They love the boating life.”

Investigators on Tuesday were focusing on one boat in particular as a possible cause of the blaze and using floating barriers to contain environmental damage that officials said seemed minimal.

The marina is on a wide creek that feeds into the Tennessee River, but it did not appear pollution from oil, propane gas and other materials had reached the main water, said Fire Chief Gene Necklaus.

Burned propane tanks were visible in water near the marina, along with an oily sheen, and the smell of gasoline was still strong in spots more than 24 hours after the blaze was extinguished.

Thousands of feet (meters) of floating barriers were being used to contain the pollution and a crane was put in place in deeper waters on Tuesday to lift sunken boats, some longer than 40 feet (12 meters). At least five of the watercraft had been removed but as many as 30 more remained at the bottom of the creek.

Crews will raise each sunken craft and check inside each to determine whether additional people may have died, Necklaus said, but officials were optimistic that the death toll would not rise.

Investigators hadn’t determined the cause of the blaze, which erupted early Monday, but Necklaus said they were narrowing their focus to a vessel that was docked in an area where witnesses said the flames began.

“It’s fair to say they are at least looking at one boat in particular, not to say that they won’t rule that out and move on to the next area,” he told a news conference.

Already removed from the water, the boat was taken to a secure area for examination, he said.

Witnesses said wind quickly swept flames down a wooden dock where an undetermined number of people were sleeping on boats. Residents described a desperate fight for life, with some piling into boats to get away and others diving into water that was in the mid-50s to swim for their lives.

A Red Cross representative said about 25 people were believed to have lived in boats at the dock full time, but it was unclear whether they were all there at the time of the fire or whether other visitors were present.

Kennamer said the only blessing was that the fire happened during a slow time when relatively few people were sleeping in boats at the dock. A blaze during the summer boating months could have been even worse.

“If this had happened in July it would have been so much more tragic,” he said.