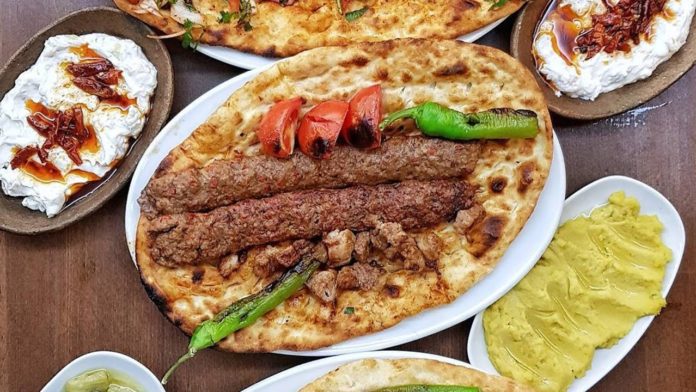 The history of Turkish cuisine is very rich and there are many varieties and flavors in Turkish cuisine that can be due to different crops and weather conditions in this land.

Istanbul attracts many tourists each year. There are many luxury restaurants in Thus city but you can also try some street foods in this city. Turkish food is the mixture and refinement of Central Asian, Middle Eastern and Balkan cuisines. Therefore it is impossible to fit Turkish cuisine into a shortlist.

Eating street food is a part of the Istanbul way of life. You can walk for over a kilometer without coming across one or more street vendors and a dozen of snack shops or buffs.

In Istunbul you cannot find anyone who can resist against the smell of fresh bread rolled in sesame. In another word, Simit is a crisp, ring-shaped, savory roll covered with sesame and sold by street sellers with glass-fronted push -cars. There are two main versions of Simit: Sokak simit that sold on the streets and very spicy and pastane simit that sold in shops and softer.

Originally a dish made of raw ground meat, pounded wheat and red pepper. It’s a delicacy, but not only found at home. Commercially sold cig kofte is no longer allowed to contain raw meat, but it’s still something you should try out

Lahmacun is one of the most delicious street food in Turkey. This is a Turkish style pizza. A very thin oval piece of pide, with ground meat, onions, pepper paste, sometimes tomato, pepper , parsley, and spices.  it is often served with a salad and a few pieces of lemon in a side dish. You will see locals topping the pizza with the salad, sprinkling it with lemon and making a roll out of it. Lahmacun can be found in all parts of Istunbul , but if you are looking for the best lahmacun made in stone ovens, it’s very good to go to Halillahmacun and Borsam Tas Firin in kadykoy neighbourhood or go to Fistik kebab in Arnavutkoy neighborhood.

Depending on the materials, Durum is one of the most versatile street foods in Istunbul.  Durum is more commonly used as a snack.Durum is actually a combination of bread with ingredients such as chicken, meat, and cheese or a variety of vegetables. The shape of Durum and also the taste of it make this dish very popular. For the best Istanbul durum, we suggest you go to the famous Taksim square in Bombay or Kizil Kayalar.

Tantuni is very similar to Durum .actually this food is a morsel food and its contents include meat, tomatoes, peppers and a mix of spices all packed into very thin bread. There are two main versions of tantuni: spicy and softer. The people of Mersin believe that tantuni must be spicy.  one of the best places to try the tantuni is Emine Ana Sofrasi in the Bilurjo neighborhood in Taksim square.

There are many street foods in Turkey that are very famous and delicious. In this post, we only introduced some of them.