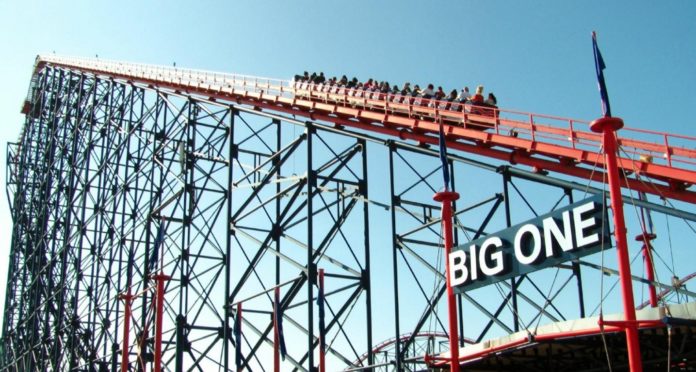 With so many Theme Parks and Adventure Playgrounds dotted around England, it can be hard to decide which ones to visit. Finding a park that has something different to offer can only be a good thing. Whether you want a rollercoaster that will scare the living daylights out of you or a one-of-a-kind ride to tell your friends about, you don’t have to look much further than England.

Probably the most famous of all England’s theme parks is Alton Towers – Officially the UK’s largest Theme park and Fun Resort. If it’s a ‘white-knuckle’ ride your after then look no further. Alton Towers has Oblivion, the world-famous vertical drop rollercoaster. After what seems like a lifetime slowly creeping up the tracks for your first drop, you are kept waiting a couple of seconds, just staring down in to the black hole that awaits you. You suddenly plunge down towards the ground, disappearing in a puff of smoke. It’s over in a matter of seconds but this unique rollercoaster is worth queuing for.

If, after leaving Oblivion, you a think you can handle another thrill, head to Nemesis – Europe’s first inverted roller coaster. Reaching G-forces greater than a space shuttle launch and hitting speeds of 50 mph, this rollercoaster requires a bit more stamina. Nemesis gained the world record for the most naked people (32 in total) to ride a roller coaster so make sure you check you’re in the right queue!

For those of you that love the thought of going on a rollercoaster but the stomach-turning rides are just a little too scary for you, head to Chessington World of Adventures. Here you will find The Rattlesnake. This rollercoaster is one of those rides you can’t get enough of. Averaging speeds of around 28 mph, it’s not the scare factor but the endless twists and turns that keep the people coming back for more.

The lesser know Lightwater Valley is home to The Ultimate – Europe’s longest roller coaster which is a massive 1.5 miles longs and 107 foot high. It’s no surprise that it 7 minute 34 seconds to complete the full ride. If you’re looking for a rollercoaster that can offer something different, The Ultimate is the one for you.

If you fancy something completely unique, why not try Europe’s only stand-up rollercoaster at Drayton manor, Shockwave. The ride reaches up to 53mph and features an 80ft drop, followed by a loop and then two corkscrew turns – not for the faint hearted. Voted “The Best Stand-Up Rollercoaster in the World”, Shockwave is definitely a rollercoaster not to be missed!