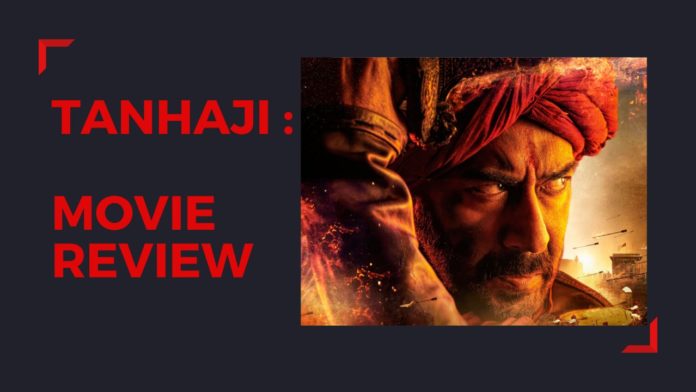 Tanhaji: The Unsung Warrior is Ajay Devgn’s 100th film.This visually enthralling period drama tells the story of the bravery, courage and larger than life spirit of the great Maratha warrior and military leader- Tanaji Malusare. After the success of Bahubali in 2015, a plethora of period films were made. What makes Tanhaji different though is the level of research done on it which reflects really well in the screenplay.

Tanhaji’s sharp editing and well structed narrative keeps you engrossed- and that’s quite an achievement. Most of the period films released in 2018(and earlier) were too long and exhaustive to sit through in entirety which kind of took away the charm. On the other hand Tanhaji, having a run time of approximately 2 hours and  14 minutes, manages to hold your attention till the final shot. Om Raut’s brilliant direction is aided well by Keiko Nakahara’s cinematography.

Ajay Devgn has definitely lived up to the expectations and his performance is really effective and praiseworthy. He completely owns the character of the great Tanaji Malusarewith his nearly perfect accent and his constant red eyes. His last few films which were pure slapstick comedies, Devgn has given himself a complete makeover (and in a positive way). He is fierce, filled with rage and has managed to reflect it really well on screen which reminded me of his Omkara days. Saif Ali Khan is impressive as a loud-mouthed evil military officer Udaybhan Rathod. In the recent years Saif Ali Khan has metamorphosed into a really versatile actor who can do almost anything and you just cannot stop yourself from appreciating this change. Whether it’s an angry Police Officer in Sacred Games or an edgy guy high-on-life in Kaalakandi– Saif Ali Khan is a hoot these days. In Tanhaji too, Saif Ali Khan plays the perfect antagonist. He is evil but humorous. In the epic battle in the climax when Tanhaji and Udaybhan face off, you are ought to get goosebumps. This Tanhaji’s climax battle is one of the finest shot battle sequences that I’ve seensince Bahubali: The Beginning. Film dips a bit in the second half but the climax makes up for it. Overall Tanhaji: TheUnsung Warrior is an entertaining and a highly informativefilm that fills you pride. A perfect weekend watch!