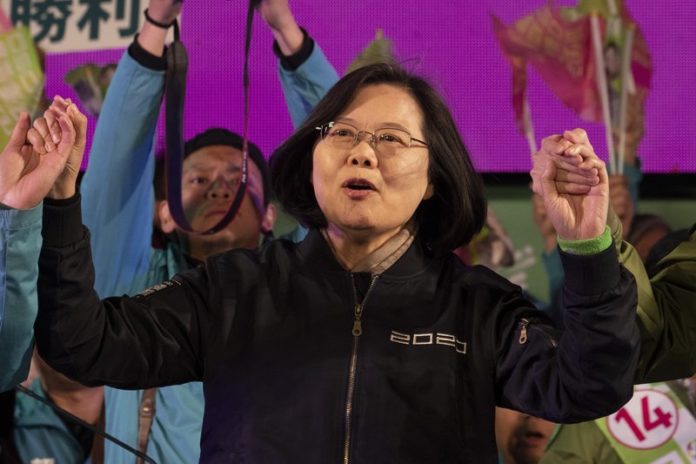 A year ago, Taiwan’s leader was on the ropes. Then she got a boost from an unexpected corner: Chinese President Xi Jinping.

Polls indicate that President Tsai Ing-wen is poised to win a second four-year term on Saturday, a remarkable turnaround for a leader whose future was in doubt after voters dealt her Democratic Progressive Party a major loss in November 2018 local elections.

Since then, Tsai has capitalized on three developments: the fears generated by China’s tough words on Taiwan, protests in Hong Kong that have reinforced those fears and U.S. government actions that reassure voters that America will have Taiwan’s back if the going gets tough.

“All the factors that help Tsai Ing-wen are happening: the China factor, the U.S. factor and the Hong Kong protests,” pollster You Ying-lung, chairman of the Taiwan Public Opinion Foundation, said at a news conference late last month.

A victory for Tsai and her independence-leaning party would likely herald continued tensions and a further souring of relations with China, which considers self-governing Taiwan a renegade province.

Her main opponent, Han Kuo-yu of the Nationalist Party, won the mayor’s race in the Democratic Progressive Party stronghold of Kaohsiung in the 2018 local elections and held a comfortable lead over Tsai in early 2019.

Tsai began chipping away at his lead in the spring and pulled ahead for good in August. She was the clear leader by the end of the year, according to an aggregation of polls by The News Lens, an independent youth-oriented media outlet.

A Tsai victory is the last thing that Xi wants, yet it was his major policy speech on Taiwan at the start of 2019 that many analysts point to as the starting point for her political recovery.

The Chinese leader upped the pressure on Taiwan to join China under the “one country, two systems” framework that governs Hong Kong. He called for talks on the issue, while saying that China would not rule out the use of force to achieve unification.

She also benefited from a revamp of her public image that used memes, animation and social media to reach young voters. Campaign spokeswoman Lien Yi-ting credited the strategy with playing an important role in boosting Tsai’s approval ratings.

Then came the Hong Kong pro-democracy protests, which erupted in June. Tsai has repeatedly pointed to the unrest as proof that the “one country, two systems” approach pushed by China doesn’t work.

Taiwan’s presidential elections generally revolve around the island’s relationship with China. Voters have gone back and forth between the tough line that the Democratic Progressive Party says is best to defend Taiwan’s sovereignty and the cooperation with China that the Nationalist Party says will foster economic growth.

“I think, because of the recent months of the Hong Kong protests and Tsai’s successful strategy of playing the anti-China card, these practical issues are played down and voters are swayed into this scare mentality,” said Jason Hsu, a Nationalist Party lawmaker who is a member of Han’s policy advisory team.

The economic argument has lost some of its potency as Taiwanese companies move manufacturing out of China because of rising labor costs and the U.S-China trade war, which has led to tariffs on Chinese goods. China has made it more difficult for Chinese tourists to visit Taiwan.

The U.S., which does not recognize Taiwan but sells it military equipment for defense, has passed laws and taken other steps that while largely symbolic have demonstrated support for the island. That emboldens voters to stand up to China, despite the risks..

“These make people believe that the U.S. is a factor that Taiwan can rely on,” said Wong Ming-hsien, a professor at Tamkang University’s Graduate Institute of International Affairs and Strategic Studies. “And if Taiwan can rely on that, it can sustain pressure from China.”

He sees these factors and the remaking of Tsai’s image as equally if not more important than the Hong Kong protests in restoring Tsai’s popularity.

“She’s like the coolest politician in Taiwan,” he said. “Young people really love her again, which is amazing because a year ago, no one liked her.”