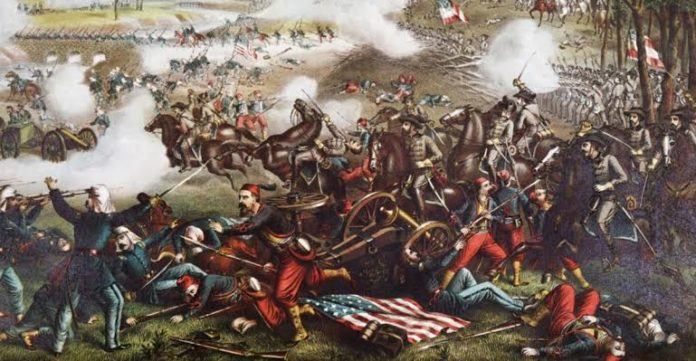 The Civil War was experienced between the northern and southern parts of the United States and characterizes the nation’s history. The conflict began on April 12, 1861 when General Beauregard attacked Fort Sumter, following simmering tensions that were felt in the country over slavery, rights of states, and regional expansion. In particular, the Republican Party opposed slavery that was exercised by the Southerners, who used slaves for their large-scale farming.

When Abraham Lincoln, the first Republican president, was elected in November 1860, most of the southern states, including Mississippi and Alabama, seceded from the United States due to fear of the abolition of slavery by the new government (“Civil War”). The war finally ended in 1865 when the Confederacy surrendered to the Union. Hence, the Civil War was initiated by the national government’s position to prohibit slavery within the country and ended after four years when the northerners defeated southerners.

The commencement of the Civil War was influenced by disagreement regarding the abolition of slavery in the United States. The country, at that time, had been experiencing economic growth in different regions; in the northern part, the nation had established industries that manufactured different products, whereas the southerners focused on large-scale farming, which was fulfilled by black slaves. Slavery had been legalized through the Kansas-Nebraska Act in 1854; however, the practice was opposed in the North, leading to the formation of the Republican Party to serve the opposition’s interests (“Civil War”).  Despite the Supreme Court’s affirmation of the legality of slavery in 1857, John Brown, an abolitionist, furthered the steps by raiding Harpers Ferry in 1859, which demonstrated to the South that the North was ready to attack them. As a result, when Lincoln was elected in 1860, seven southern states, including Texas, Louisiana, Georgia, Alabama, Florida, South California, and Mississippi, seceded from the U.S. and formed the Confederate States of America, which would fight against the Union until 1865 (McPherson). Therefore, the differences between the free and slave states regarding the abolition of slavery led to the Civil War.

The Civil War spread to different parts of the United States after being triggered by the attack of Fort Sumter. In particular, when the fort was fired at by Confederate forces, the Union’s commander, Major Robert Anderson, surrendered; hence, the southerners acquired Sumter. However, four more southern states seceded from the U.S. and joined the new union. On July 21, 1861, Thomas Jonathan led 35,000 Confederate soldiers in the battle of Bull Run, in which they defeated the Union forces; as a result, Lincoln recruited 500,000 more soldiers into his troops (“Civil War”).  More battles were experienced in 1862, including in Shiloh, Tennessee and Fredericksburg, Virginia, most of which were won by the Union. Essentially, the North had an advantage over the South because of its high population and the availability of weapons, which were manufactured by its industries. More victories were realized by the Union troops until 1864, when they entered Georgia and South Carolina, which were the capitals for the Confederate states. On May 10, 1865, the president of the Confederate States of America, Jefferson Davis, was captured by Union troops (McPherson). As a result, all Confederate armies surrendered, and the war ended. The southerners and northerners united, and slavery was abolished within the United States. Hence, the Civil War was characterized by several battles that eventually ended when Jefferson Davis was captured, leading to the reunion of the free and slave states to form the new United States, free from slavery.

Generally, the Civil War was characterized by several battles between the South and the North of America. The war resulted from the government’s decision to abolish slavery, which had been permitted prior to the election of Abraham Lincoln in 1860. Such regions as South Carolina and Virginia initiated severe battles, culminating in the southern troops surrendering after being besieged by the northern armies. The fight against slavery finally ended in 1865 after a four-year war, which resulted in the liberation of the country’s remaining slave populations and the unity of the northern and southern regions to form the United States of America.

As a matter of fact, sometimes you may struggle with writing history papers in college and university. If you do need expert writing help online, please visit https://writemypaperhub.com/history-papers.html if you are ready to pay someone to write your own history essay or any other academic paper.