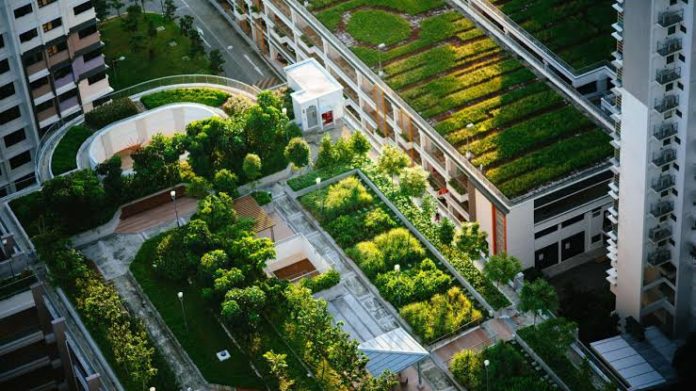 Even on an overcast, 23° Celsius day, black tar roofs can reach temperatures as high as 70°. But the green atop Toronto City Hall boasts a 35,000 square foot garden, which keeps the roof’s temperature at the forecasted 23°.

Green roofs worldwide are becoming increasingly common, as property owners realize the advantages of having a garden on top of their buildings. For the uninitiated, a living roof is most simply described as being a living layer of grasses, shrubs, and mosses, planted over a waterproof membrane on a flat roof. A fascinating combination of engineering and ecology, living roofs can be tailored to suit almost any building, and can be installed on new buildings or retrofitted to existing ones.

The Big Question Is: Why Would Anyone Want One?

Firstly, a green roof provides a mini-habitat for birds, bugs, and butterflies – you’ll have your own little ecosystem on your roof. Also in urban areas, you often don’t have space for plants or trees, so a living roof is a good opportunity to get some green space back into the concrete jungle. What’s more, living roofs dramatically reduce storm-water run off, improve air quality, lessen the impact of the urban heat island effect, increase biodiversity and increase a roof’s lifespan. In short, they are brilliant for the planet.

The most important practical advantage of a living roof, however, is its energy saving potential. While living roofs do provide some degree of insulation to a building during the colder months, the major advantage lies in their ability to keep buildings cool during summers. With a living roof, the plants absorb heat and reflect some of it back as well, so it keeps the building a lot cooler.

With buildings responsible for about 50 per cent of CO2 emissions, green roofs could make a real contribution to the battle against climate change.

This recent growth of interest in green roofs is only the latest development in a centuries-old tradition. People have been building living roofs for thousands of years in Europe, right back to the Vikings, but it’s only recently that building codes and regulations have caught up. In May 2009, Toronto became the first city in Toronto to adopt a Green Roof Bylaw.

If the idea of a living roof sounds appealing, there are some practical aspects to consider. The term “living roof” covers a wide variety of installations. Buying a green roof is not like buying a table, you can’t just go down to IKEA and pick up a flat pack. You’ve got to do some research first and find out what type is best for you. Broadly speaking, green roofs come in two varieties: “extensive” and “intensive”. Extensive roofs consist of a thin stratum of soil and rock wool, supporting small, hardy sedum plants and mosses, and thus are lightweight and relatively low-cost. Sedum can survive with no water for up to three months; it’s a tough little plant and maintenance is minimal.

Intensive roofs, on the other hand, feature a thicker layer of soil that can host a much wider variety of flora, including lawn grasses, large plants and even small trees. The thicker substrate, however, has a higher weight and cost, and requires more maintenance. The depth of a green roof can be varied according to taste and requirements, and living roofs are flexible enough to be adapted to many different situations.

There are, of course, some places where a living roof would not be suitable. The extra weight isn’t normally an issue. Always get a structural engineer to have a look at your property, give you ideas and give you the thumbs up. You don’t want your roof collapsing, obviously.

So What Are the Downsides?

If your structure can support a living roof, it really is the way to go. I’d much rather have a green roof providing its own little habitat and doing its bit for the environment than a slab of felt or concrete. In fact, the only downside to a green roof might be the price. It is more expensive, but you simply can’t price the value of having a green visual space which you can enjoy.

When Is the Right Time to Buy a Home?

Tips for Creating a Modern and Stylish Home