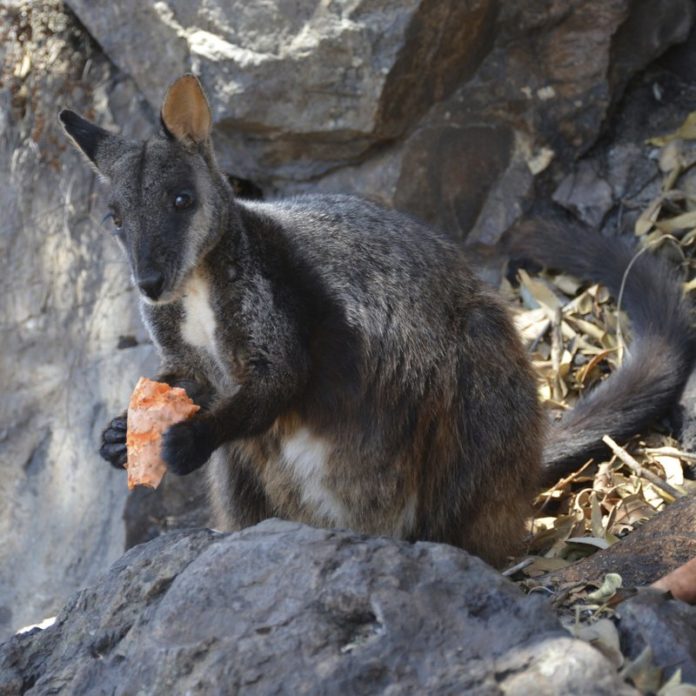 Australia’s unprecedented wildfires season has so far charred 40,000 square miles (104,000 square kilometers) of brushland, rainforests, and national parks — killing by one estimate more than a billion wild animals. Scientists fear some of the island continent’s unique and colorful species may not recover. For others, they are trying to throw lifelines.

Where flames have subsided, biologists are starting to look for survivors, hoping they may find enough left of some rare and endangered species to rebuild populations. It’s a grim task for a nation that prides itself on its diverse wildlife, including creatures found nowhere else on the planet such as koalas, kangaroos and wallabies.

“I don’t think we’ve seen a single event in Australia that has destroyed so much habita t and pushed so many creatures to the very brink of extinction,” said Kingsley Dixon, an ecologist at Curtin University in Perth.

Before this fire season, scientists estimated there were as few as 15,000 left in the wild. Now recent fires in a region already stricken by drought have burned through some of their last habitat, and the species is in jeopardy of disappearing, Ballard said.

In prior years, his team identified a handful of colonies within the national park. After the recent fires, they found smoking tree stumps and dead animals.

“It was just devastating,” said Ballard from the University of New England in Armidale. “You could smell dead animals in the rocks.”

But some wallabies, his team discovered, were still alive. “All you can do is focus on the survivors,” he said.

Australia’s forests and wildlife evolved alongside periodic wildfires. What’s different this year is the vast extent of land burned — an area as big as Kentucky — against a backdrop of drought and searing temperatures attributed to climate change. Last year, among the driest in more than a century, saw temperatures that routinely topped 104 degrees Fahrenheit (40 degrees Celsius).

Not all animals will perish in the blazes. Some can shelter in rock crevices or hide deep in underground burrows. Yet when survivors emerge into a fire-scorched wasteland, they will face hunger, thirst and non-native predators, including introduced foxes and feral cats.

Since fires swept through parts of Oxley Wild Rivers National Park nearly two months ago, there’s been little rain and no green shoots.

So Ballard’s team has trekked through the ash-covered forest carrying water and sacks of sweet potatoes, carrots and food pellets.

“There are so few left that, with a species this rare, every individual counts,” he says.

Elsewhere in New South Wales, conservation workers are dropping vegetables from airplanes into scorched forests, hoping that wallabies and other species find a meal.

In the state of Victoria, authorities estimate that brush-tailed rock wallabies lost 40% of their habitat as did another rare marsupial, the long-footed potoroo, according to a preliminary damage assessment.

The full toll on Australia’s wildlife includes at least 20 and possibly as many as 100 threatened species pushed closer to extinction, according to scientists from several Australian universities.

“The worry is that with so much lost, there won’t be a pool of rare animals and plants to later repopulate burnt areas,” said Jim Radford, an ecologist at La Trobe University in Melbourne.

The fires could knock out rainforest species dating back to the time of the Gondwana supercontinent, before the modern continents split apart, he said.

University of Sydney ecologist Christopher Dickman estimated that more than 1 billion animals have been killed so far. His calculations took previously-published animal density numbers for different vegetation types and multiplied that by acreage burned.

He says that number does not include bats, amphibians, insects or other invertebrates.

The wildlife toll includes tens of millions of possums and small marsupials known as gliders, which live in tree tops and can leap extraordinary distances by using a parachute-like membrane of skin between their ankles and wrists. State officials in Victoria predicted more than a 25% reduction in glider numbers from the fires.

“The implications for some species are pretty grim,” Dickman said. “If we can’t protect them here, they’re gone. No one else has them.”

The Australian government announced Monday that it was spending $50 million on emergency wildlife rescue efforts and habitat recovery.

Fires are still burning in the Blue Mountains, a UNESCO World Heritage site west of Sydney — one of the last strongholds of the regent honeyeater, an elegant black and yellow bird that has already lost 95% of its breeding habitat since European settlers arrived in Australia.

There are only 300 to 400 of the birds left in the wild, says Ross Crates, an ecologist at Australia National University. They are dependent on nectar from certain eucalyptus tree blossoms, but the dry weather has meant that many trees are producing no nectar.

After the wildfires subside, Crates plans to survey what’s been newly scorched. “Even for birds that survive the fires, we are concerned about how they will feed and nest.”

In recent months, areas that don’t usually burn went up in flames. Some rainforests dried up in the drought and extreme heat, allowing fire to sweep through them.

Few images have tugged at heartstrings more than koalas clinging to burnt trees. Unlike birds or ground mammals, they cannot fly away or burrow underground.

While koalas are not classified as vulnerable to extinction, their populations in some fire-ravaged areas may have been snuffed out. “We know there’s been a massive reduction of their overall habitat, and we’re not even at the end of fire season,” said Mathew Crowther, an ecologist at the University of Sydney.

“Koalas won’t go extinct in the next few years, but if their habitat is destroyed bit by bit, it could eventually be death by a thousand cuts. We have to look at long-term trends — what will the temperatures and wildfires be like in the future?”

Sydney’s COVID-19 lockdown to end sooner for the vaccinated