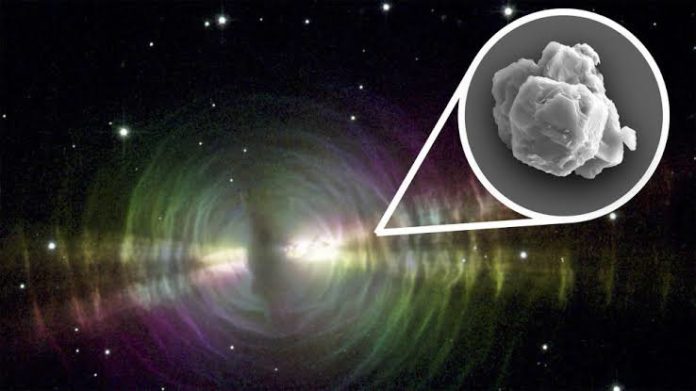 (IANS) Scientists have discovered the oldest solid material ever found on Earth — seven-billion-year-old stardust trapped inside a meteorite.

This stardust provides evidence for a ”baby boom” of new stars that formed seven billion years ago, contrary to thinking that star formation happens at a steady, constant rate.

The meteorite fell 50 years ago in Australia.

“This is one of the most exciting studies I’ve worked on,” said Philipp Heck, a curator at the Field Museum, and Associate Professor at the University of Chicago.

“These are the oldest solid materials ever found, and they tell us about how stars formed in our galaxy,” Heck added in a paper appearing in the journal ”Proceedings of the National Academy of Sciences”.

The materials Heck and his colleagues examined are called presolar grains-minerals formed before the Sun was born.

These bits of stardust became trapped in meteorites where they remained unchanged for billions of years, making them time capsules of the time before the solar system.

Presolar grains are hard to come by. They”re rare, they”re tiny, and found only in about five percent of meteorites that have fallen to Earth.

The Field Museum has the largest portion of the Murchison meteorite, a treasure trove of presolar grains that fell in Australia in 1969 and that the people of Murchison, Victoria, made available to science.

“It starts with crushing fragments of the meteorite down into a powder,” explains Jennika Greer, a graduate student at the Field Museum and co-author of the study.

“Once all the pieces are segregated, it’s a kind of paste, and it has a pungent characteristic – it smells like rotten peanut butter”.

Once the presolar grains were isolated, the researchers figured out from what types of stars they came and how old they were.

The researchers learned that some of presolar grains in their sample were the oldest ever discovered – based on how many cosmic rays they’d soaked up, most of the grains had to be 4.6 to 4.9 billion years old, and some grains were even older than 5.5 billion years.

Since presolar grains are formed when a star dies, they can tell us about the history of stars. And 7 billion years ago, there was apparently a bumper crop of new stars forming a sort of astral baby boom.

This finding is ammo in a debate between scientists about whether or not new stars form at a steady rate, or if there are highs and lows in the number of new stars over time.

“It”s the next best thing to being able to take a sample directly from a star,” said Greer.