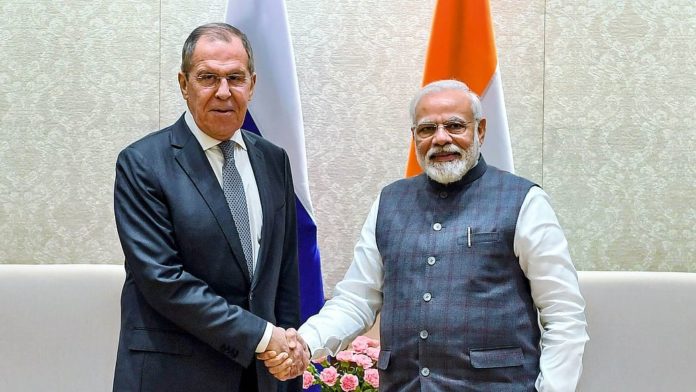 (PTI) The year 2020 should be the year of implementation of the bilateral decisions taken by India and Russia last year, Prime Minister Narendra Modi said on Wednesday.

Modi made these remarks when Russian Foreign Minister Sergey Lavrov called on him, a statement from the Prime Minister’s Office said.

During their interaction, Lavrov briefed the prime minister on his country’s position on key international and regional issues. Lavrov is in Delhi to participate in the ‘Raisina Dialogue’.

“The prime minister noted that several important decisions and outcomes were reached between the two countries in 2019. He suggested that the year 2020, which is also the 20th anniversary year of the establishment of the strategic partnership between India and the Russian Federation, should be the ‘year of implementation of those decisions’,” the statement said.

Lavrov conveyed that President Putin looked forward to the visit of Prime Minister Modi to Russia in May 2020 to participate in the 75th-anniversary celebration of the Victory Day, and in July 2020 for the BRICS and SCO Summits.

The prime minister welcomed the fact that he would get multiple occasions this year to meet Putin, and said he also looked forward to hosting the Russian president for the annual bilateral summit later this year in India.

During the interaction, Modi referred to the wide-ranging conversation he had with Putin over the telephone on January 13 and noted the progress in the Special and Privileged Strategic Partnership between the two countries in the previous year.

Prime Minister Modi welcomed the leaders to India and appreciated their participation at Raisina Dialogue 2020.

He spoke about the large-scale efforts undertaken by the government for rapid and inclusive socio-economic development and highlighted their significance for alleviating major global developmental challenges and attaining sustainable development goals, the MEA said.