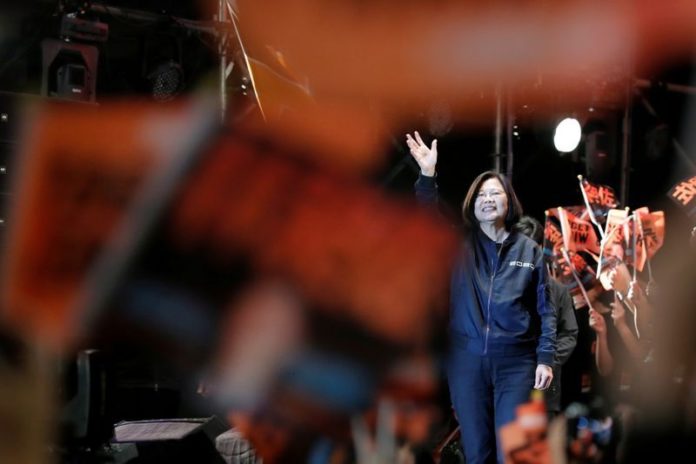 Taiwan votes in presidential and parliamentary elections next Saturday, with three candidates standing for the position of president, including current leader Tsai Ing-wen who is up for re-election at the end of her first four-year term.

Here are profiles of the three presidential candidates.

Tsai, 63, became Taiwan’s first female president in 2016 following massive protests over a proposed trade pact with China that had been championed by the administration of President Ma Ying-jeou from the Kuomintang party, which favors close ties with China.

Growing up in a well-off family in Taipei, Tsai graduated with a degree in law from the island’s top university before going first to Cornell and then the London School of Economics where she got her doctorate in trade law.

After a career in academia, Tsai was part of the team negotiating Taiwan’s entry into the World Trade Organization and then joined the China-policy making Mainland Affairs Council, which she ended up running from 2000 to 2004.

Tsai joined the Democratic Progressive Party (DPP), which favors Taiwan’s formal independence, in 2004, and briefly served as a vice premier from 2006-2007.

Tsai, an animal lover who frequently posts pictures of herself with cats and dogs on her social media pages, first stood for president in 2012, but lost to Ma who won a second term in office.

Since taking office China has heaped pressure on Tsai, fearing she is pushing Taiwan toward formal independence. Tsai says Taiwan is already an independent country called the Republic of China, and has vowed to defend the island’s democracy and liberties.

Tsai says a vote for her is a vote against Taiwan becoming “a second Hong Kong” and being forced to accept a union with China under a “one country, two systems” principle. Tsai has repeatedly said Taiwan faces a life and death threat to its existence and democratic way of life from China.

Han, 62, is the mayor of the southern Taiwanese city of Kaohsiung, and is the candidate for the Kuomintang, which once ruled mainland China before it was forced to flee to Taiwan in 1949 at the end of the Chinese civil war.

Han went to a military academy and then studied English literature at Taipei’s prestigious Soochow University.

In 1992, Han won election to parliament, but later dropped out of politics before re-appearing in 2017 to run for the chairmanship of the Kuomintang – which he lost – though the following year he became the party’s Kaohsiung mayoral candidate.

With a strong social media presence, Han unexpectedly won the election in a city which had traditionally been a DPP stronghold, promising to boost the economy in a city hard hit by factories moving to produce in far cheaper China.

Han has been combative on the campaign trail, not afraid to directly denounce media he doesn’t like and accusing Tsai of being a covert supporter of Taiwan independence for refusing to call Taiwan by its Republic of China name. Tsai says this is nonsense.

Han has promised to repair ties with China, though he has also rejected “one country, two systems”, and says he supports the passage of a refugee law to help protesters who have fled Hong Kong for Taiwan.

Soong, 77, is a former senior Kuomintang politician now chairman of his own organization, the small People First Party. This is the fifth time he has stood for president or vice president.