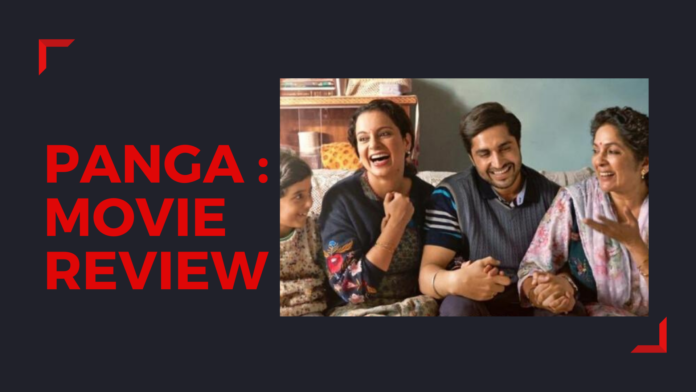 “Main kya kar sakti thi, aur main kya kar rahin hoon” (I was capable of so many things but see what I am doing)- Haven’t we all heard this line from so many mothers who have to give up on their dreams and aspirations for the sake of being there for their families?

Panga might look like a sports-based biopic but it is actually an ode to the indominable spirit of women around us (especially our mothers) and the sacrifices they constantly make for us. This inspiring and high on emotion film tells the story of an ex-captain of the Indian Kabaddi Team  Jaya Nigam (played by Kangana Ranaut) who decides to do a comeback after eight years long hiatus but faces conflicts which are both internal and external.

I really don’t remember when was the last time I had seen an exhilarating story told in such a gentle yet effective manner. Panga is a film that might look familiar in plot but the brilliant direction of Ashwini Iyer Tiwari takes this film to major heights. One of the best things of Panga is the sincerity with which each frame of this film has been shot. You see train engines on tracks making loud thumping sounds, small sized quarters with things of utility stacked over each other and some happy souls who constantly smile off the worries away. The opening credits begin with a beautifully composed song ‘Jugnu’ which instantly sets up the tone.  Unlike other Bollywood sports drama no time is wasted in the introduction of the characters and in less than ten minutes you are directly thrown into the main plot.

With Panga, Kangana Ranaut undoubtedly gives her career best performance and while writing this I have to admit she is one of the most versatile actors we have in Bollywood. She is confident, charming and funny. In one of the scenes where she is feeling sorry for not arriving at the Annual Sports to cheer for her son- you see nervousness, anger and sadness, all at once and you realise how brilliant of an actor she is and how important it is to have good actors in a film who add much needed gravity to a scene. Jassi Gill, who plays the extra-cautious and super supportive husband, is perfectly casted. Inspite of being surrounded by ace actors Jassi (who is just two films old in Bollywood) manages to mark his presences.

Richa Chadda who plays a loud-mouthed Kabaddi Coach and Jaya’s best friend is a total riot. She constantly questions misogyny and thrashes them like anything. The funniest of the lines of the film belong to her and she definitely lights up the screen with her presence. And not to forget Yagya Bhasin (playing Jaya’s son) who is a revelation and is so good with his acting skills that it’s hard to believe he is just ten years old. Full marks to the casting team for bringing such great talents together.

Ashwini’s last two films- Nil Battey Sannata and Bareilly Ki Barfi- both have relied majorly on top-notch acting performances and sharp writing. Panga too is riveting, sensitive and infused with a refreshing energy. The plot, though simplistic and unconvulated, touches heart and in the climax when you see tears in the eyes of a determined mother who went all the way to reclaim her identity and never gave up on her dreams- you cry along with her.

This beautiful film that celebrates motherhood and inspires us to believe in our dreams should not be missed at any cost. Highly recommended.