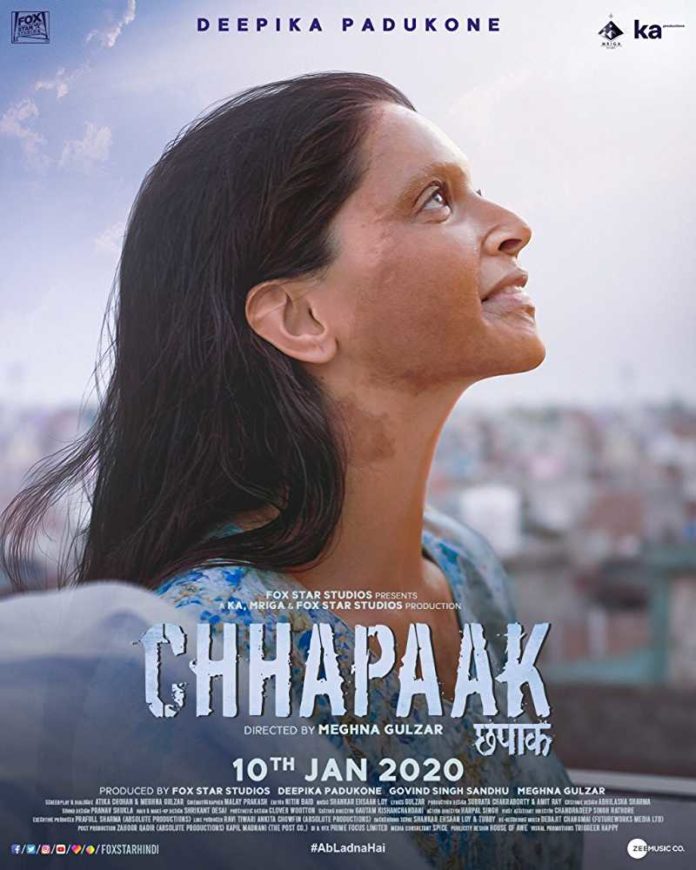 Our blood needs to curdle.

Our false sense of relief needs to be stifled.

For once, I would like to write about what the film made me feel. Not how much it earned at the box office. Not how many eyeballs it caught. Excuse my words but I wish I was able to stress enough why films like Chapaak are so important. But my words wouldn’t be enough.

“I’ve had a good day, don’t want to ruin it with a depressing film.”

“I’ve had a bad day, don’t want to make it worse with a depressing film.”

“I only watch films once in a while, might as well watch a feel-good film.”

What’s made us so privileged, may I ask? I admit, I’ve been a victim of ignorance too. So convenient to stay in our own warm bubbles, isn’t it?

Chapaak jolted me out of my sense of existence, to say the least. The film, so simplistically shows the horror of acid attacks and thankfully, also tries to delve into the psyche of the attacker. Meghna Gulzar has made a masterpiece of a film which makes the viewer feel just how simply a coward nudges you on the shoulder, splashes a glass of acid on your life and ruins it forever

You usually know what to expect from a story based on true events (especially an incident like Laxmi’s which was pretty publicised) but the uneven, non-linear timeline makes the film exponentially more powerful because you see how Malti’s life was before and after in jolts, not in a predictable story-telling way.

Chapaak made me hate the word Chapaak in itself. It made me cringe and cry at Malti’s fate through no fault of her own. Even so, Malti simply mentions with a smile on her face, “Kitna accha hota agar acid bikta hee nahin? Milta nahin, toh phikta bhi nahin.”

The performances are so surreal, Deepika Padukone playing an 18 year old put me off but it didn’t really matter. All your attention is on watching out for Babbu Bhaiya, the monster of a man played by Vishal Dahiya. Vikrant Massey, as usual plays himself. But I can bear with it for his intense yet loveable 1D character. The saddening layer of an ex-boyfriend (Rajesh) disowning all ties with an acid attack victim plays with your mind even more. Ankit Bisht does it with innocence in all its glory. The agony and guilt pierces through his face and makes you hate him for retracting his invaluable testimony. A very special mention to the woman who played an angel in Malti’s life- Shiraz Aunty- Paayal Nair is impeccable. Strong yet empathetic.

Showing companionship amongst fellow victims, showing humanity around women who’ve lost their identities, showing them having the same arguments with their parents as we do.

It’s all been made real and human. Like it was me in the story. It made me shudder and put myself in Malti’s shoes. It was so important for me to get that reality check. So important to listen to the words, “Chapaak se pehchaan le gaya.”

That last scene was so mandatory. I feared that, like every Hindi film, the end would show everything to be rainbows and butterflies ending with a newfound love. But it doesn’t. It doesn’t lull you into a sense of relief in the end. It starts another story of a bride attacked on her wedding day. And then another one, and another one. Upto 300 cases in 2019.

It left me with a sense of purpose and awareness.

Face it, learn it, experience it, be in it. Cry, laugh, cringe, scream, hate the perpetrator. Do all of it. I promise it’ll be worth it. It’s cathartic, it’s important.