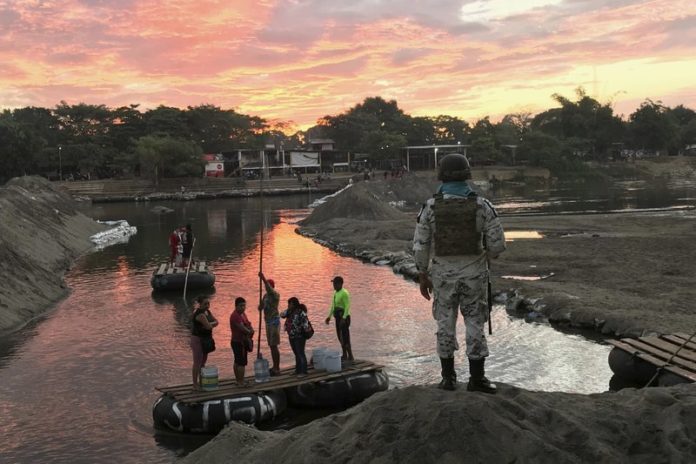 More than 200 mostly Honduran migrants rested on a bridge at the Guatemala-Mexico border waiting for the arrival of others and hoping sheer numbers will improve their chances of entering Mexico and continuing their journey north.

Across the river from Tecun Uman, in the Mexican border town of Ciudad Hidalgo, National Guard troops with riot shields trucked in throughout Friday afternoon in anticipation of the migrants’ next move.

Mexico’s government has said migrants entering the country without registering will not be allowed to pass from the border area. But those seeking asylum or other protections will be allowed to apply and legalize their status.

Guatemalan officials had counted more than 3,000 migrants who registered at border crossings to enter that country in recent days and there were additional migrants who did not register.

“We’re readying ourselves,” she said. “We don’t know exactly how many people are coming.”

About 148 migrants had crossed to Ciudad Hidalgo in recent days and requested asylum, Hernández said. At least 500 more were spread around Tecun Uman waiting.

As night fell Friday, migrants tried to sleep on the Guatemala side of the bridge, heads propped on knapsacks, children lying on parents. Damp clothes hung from fences. Others killed time playing soccer along the banks of the Suchiate river.

“We have to wait to see what happens,”said Tania Mejía, a 25-year-old mother from Honduras. She had staked out a few square feet on the ground beside a tree at the bridge’s entrance with her 6-year-old son and 3-year-old daughter.

Mejía wanted to be among the first to cross, but was weighing that desire against the safety of her children and thinking she might hang back to see how things develop.

Her memories are still fresh of the first two migrant caravans she traveled with alone, one at the end of 2018 and another in the spring of 2019. She knew things could escalate if security forces tried to stop the migrants from entering Mexico.

“They say the Mexicans aren’t going to allow passage, but who knows?” she said.

If necessary, Mejía said, she might have to wade across the river like she did one of the previous times. Her hope this time is not making it to the United States, but rather to northern Mexico.

“I have a person in Mexicali who can give me a job so I went to get there,” she said.

The bridge was not closed by Mexico on Friday. Migrants who wanted to cross and request asylum or seek to regularize their status and find work could do so.

But the migrants were wary of a trap. Mexico’s offer of legal status and potential employment carries a stipulation that would confine them to southern Mexico, where wages are lower and there are fewer jobs than elsewhere in the country.

Hernández, the mayor, said it is different now in Mexico from 2018 and early 2019, when mass caravans flowed across the border. She said the Mexican government from the municipal to the federal level is coordinated and prepared.

She expected more guardsmen to arrive in Ciudad Hidalgo “so the people don’t cross via the river, so that he who wants to enter Mexico, as our president says, ‘Welcome,’ but via the bridge.”

In Guatemala’s capital, Mauro Verzzeletti, director of the local migrant shelter, said he expected 1,000 to 1,500 people to bed down there Friday night. The migrants planned to set out again Saturday around 4 a.m.

Meanwhile, Guatemala’s human rights defender’s office said there were a bit more than 1,000 migrants gathering at another point on the Mexican border far to the north in the Peten region and there were reports that Mexican forces were gathering on the other side of the border there.

In Ciudad Hidalgo, Francisco Garduño, commissioner of Mexico’s National Immigration Institute, was emphatic that migrants who try to enter the country irregularly would go no farther.

“They cannot enter because it would be in violation of the law,” he told The Associated Press. He declined to talk in specifics about border reinforcements, but said there were “sufficient” troops to keep things orderly.