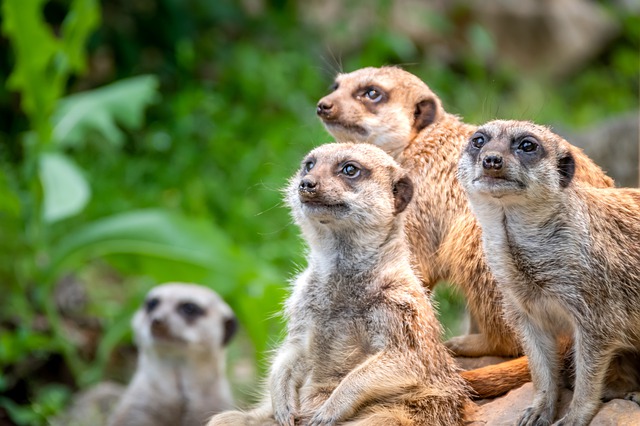 Loaded with some outstanding forests and exotic landscapes, South Africa offers traveling options to tourists from around the world. Now that the tourism industry is in a boom, the discounted timeshare packages are available for interested tourists. Plus, the convenient online marketplace allows them to make use of timeshare rentals for various bookings on vacations. So now, it has become quite easy to explore Africa. Beside all the other things, you will also get to experience a gregarious creature called meerkat.

They are usually found in a collective group called a gang or mob. Often, several families form a community to live together. The most unusual and appealing thing about these creatures is that they have an upright posture. This is quite fascinating about a creature that is about two inches in size. You can never forget the way they stand on their rear feet to gaze through the terrain to look for any predators.

It is common knowledge that meerkats are excellent diggers. Potentially, the burrows that they make have around 15 entrance and exit holes. Moreover, the burrows are comprised of several tunnels and chambers at various levels. These creatures are capable of digging burrows as deep as two feet under the ground. You will also find a meerkat mob quite conscious about their territory.

Normally hidden in their burrows during night, the meerkats move out to greet the sun each day. They like to spend most of their time in sunbathing or grooming. They possess all natural defenses which help them control their body temperature against all odds. So mostly, you will find them lying on their back to get warmth from sun, or they lie on their stomachs over some cool rock. Once sufficiently warmed up, the meerkats are ready to go for the rest of the day in the forage for food.

Now here comes the interesting bit, the meerkats are much famous because of their daring diet. Killing snakes and eating scorpions and that too without getting hurt is much of a dare. Even the poison seems ineffective on them as they are grown immune to it. Apparently, no prey is safe from a meerkat as they can smell their prey out from any corner. These creatures can quickly dig out insects, and are capable of hunting spiders, rodents, birds and even lizards. Plus, they also have an appetite for fruits, grass etc. Seems like a huge variety, does not it?

However, meerkats are also a tasty treat for other predators. But these amazing creatures have a way to ensure their safety. They take turns to act as a guard to make everyone else aware of any possible threat. Meanwhile, other meerkats can safely continue their hunt for food in the vicinity. The guard standing upright at the highest rock alerts others with his specific sound in case of any threat.