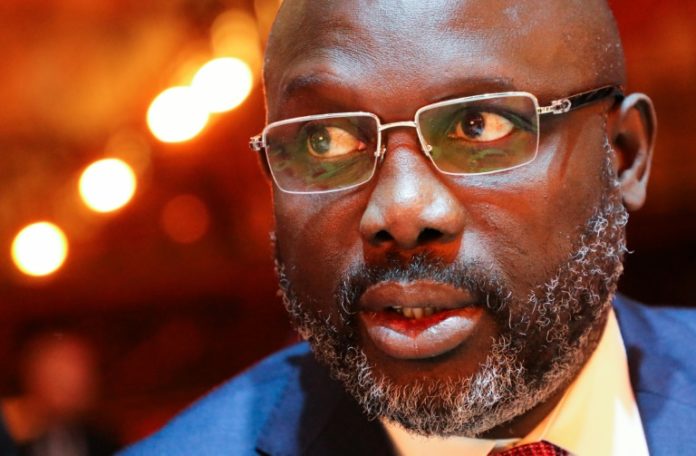 Dominic Kpadeh heaves a hammer over his head to crack a half-tonne rock in a northern suburb of Liberia’s capital Monrovia, knowing his hard labour earns him far less than a year ago.

Stories such as Kpadeh’s are common in Liberia, where rampant inflation has left many people struggling and increasingly turning their anger on President George Weah.

“I do this in order to feed the family,” says Kpadeh, a 45-year old father of four, bent double from the effort. “People are no longer building like before. Even those who are coming for crushed rock want to buy it very cheap.”

A former football icon whose goals for AC Milan and Paris St Germain dazzled fans, Weah came to power in January 2018, promising to invest in education and create jobs.

His election win was a watershed moment for Liberia’s poor, many of whom idolised the man who rose from Monrovia’s slums to football stardom, and the nation’s highest office.

But two years into his presidency, many complain he is failing in his economic stewardship.

People struggle to get bank notes from ATMs, civil servants regularly go unpaid and inflation soaring to around 30 percent has eroded purchasing power.

“We saw George Weah as one of us because he came from a poor family,” said university student Andrew Seiwon. “But for the past two years everything has been promises.”

Weah, who seldom gives interviews, admitted there was “still lots of work to be done” in his New Year’s speech.

“I am confident that 2020 will be a year of economic recovery,” he said.

Weah’s spokesman Solo Kelgbeh, highlighting central bank reforms, said the former footballer “is doing everything to make sure the economy is resuscitated”.

More than 4,800 Liberians also died during the 2014-2016 West African Ebola crisis, and the country is still feeling the aftermath.

The IMF’s representative in Liberia, Geoffrey Oestreicher, told AFP that — in a “perverse effect” — key inflows of foreign currency were lost as aid funding declined after Ebola, which drove inflation.

“Poor people are the ones suffering,” he said, noting that Weah was nonetheless trying to address Liberia’s deep-rooted problems.

The United Nations was Liberia’s second-largest employer, Kelgbeh said, underscoring the impact of the departure of aid workers.

“To go in the coffers and get things that were not budgeted, things that the international community left undone, is a huge financial burden,” he said.

Still, expressions of discontent are growing, along with questions about whether the former footballer is out of his league.

“The intent of the protests is to divert people’s attention and scare investors away, thus making the president unpopular,” Kelgbeh said, blaming opposition leaders.

Thousands of people again protested on January 6, after months of tension between the government and the opposition Council of Patriots (COP) group behind the rallies.

In October, Liberia shut down a radio station critical of the president, owned by COP chairman Henry Costa.

“The two years of George Weah have been a total failure,” said Mo Alie, a COP co-chairman. “Prices have gone so high that the people are finding it difficult to make the two ends meet.”

Weah has also disappointed victims of the brutal civil wars by hesitating to heed international calls to establish a war-crimes court to probe massacres, mass rapes, use of child soldiers and other abuses.

“My mother was raped in my presence and the perpetrator is still around… I need justice,” said Martha Selewon, a 40-year-old jobless woman.

Weah has said he is “at a loss” to understand calls for a court years after the fact, but that he has started consultations.

Despite Liberia’s economic woes, the president still retains support among the poor.

Weah himself was raised by his grandmother on a reclaimed swamp in one of the worst slums of the capital Monrovia.

A high school dropout, he ran for president unsuccessfully in 2005, during a campaign in which he was criticised for his lack of qualifications. He later completed a university degree.

“I think we should give the president a chance,” said Makagbeh Kanneh, 35, who admitted her daily meals had doubled in price.

“The same way he used to score last-minute goals to qualify his teams when he was footballer,” he said. “He will do same for us.”