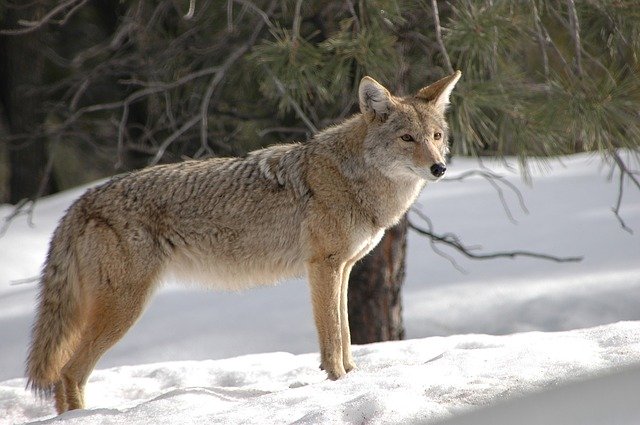 Whenever anyone tells of seeing a coyote in a heavily populated area, they are met with the inevitable question, “Are you sure it wasn’t a dog?” The response is usually short on specifics but long on emphasis: “It didn’t look like a dog.” But, of course, a coyote does look like a dog. Just not exactly.

One commonly cited difference is that a coyote has longer legs than a dog has. I’ve used that description myself, but I always felt a little uncertain. “Longer legs” isn’t quite accurate. A coyote is somewhat longer than it is tall, and so is a typical dog.

No, a coyote does not actually have longer legs than a dog has. But there is an unmistakable impression of “legginess” about a coyote.

After puzzling over it for a while, I realized what it was. A coyote’s “elbow” lies below the line of its sternum, and a dog’s “elbow” is higher than its sternum. (There are rare exceptions, but I’ll get back to that.)

A German shepherd is a fairly typical domestic dog, and one that looks superficially similar to a coyote, but take a close look. Like most domestic dogs, the shepherd’s “elbow” joints are much higher than the underline of its chest. Even a decidedly un-coyote-like dog such as a Boston terrier has its “elbows” higher than its sternum. The same is true of just about every dog I’ve examined (with a few exceptions, which I’ll get back to). A picture of a coyote clearly shows the “elbow” well below the underline of the chest.

Now, why is this? Is the coyote’s humerus proportionally longer than the dog’s? Maybe so. But for field identification purposes, it is not really necessary to take precise measurements.

Look very closely at pictures of coyotes and dogs, and you will see that the real difference is that the dog’s chest is proportionally deeper than the coyote’s.

The same is true in other wild canids. Domestic dogs have deeper chests than foxes, wolves, or jackals.

The gray wolf is the most equivocal of the wild canids in this regard. A gray wolf’s chest is a bit deeper than that of a coyote, and its elbow joint is just about on the same level as the underline of its chest. This can be rather hard to distinguish when the wolf has long fur, as they often do.

But this is a pretty good rule of thumb: A domestic dog’s elbow is higher than its chest, and a wild dog’s elbow is at or below the line of the chest.

What about those exceptions I mentioned earlier? There are two, the sighthounds, and the “primitive” domestic dogs.

In most sighthounds, the elbow joint actually is lower than the underline of the chest. This is obviously not a matter of having a shallow chest. Sighthounds have proportionally longer humerus bones than other dogs. Still, nobody is going to mistake a greyhound for a coyote.

“Primitive” dogs also often have the elbow joint lower than the chest. They retain the same proportions of chest depth and leg bone length as their gray wolf ancestors.

Fortunately, most primitive dogs are strikingly different from coyotes in other characteristics. Most “pariah” dogs are yellow, and many also have drooping ears and/or curled tails, which coyotes and other wild canids never have. And these primitive dogs are very rare in North America, where coyotes live, and you’ll never see one roaming free.

Next time you think you see a coyote, try to get a good view of the front legs and see where the “elbow” joint is. A coyote has a very “leggy” look that comes from a shallow chest.