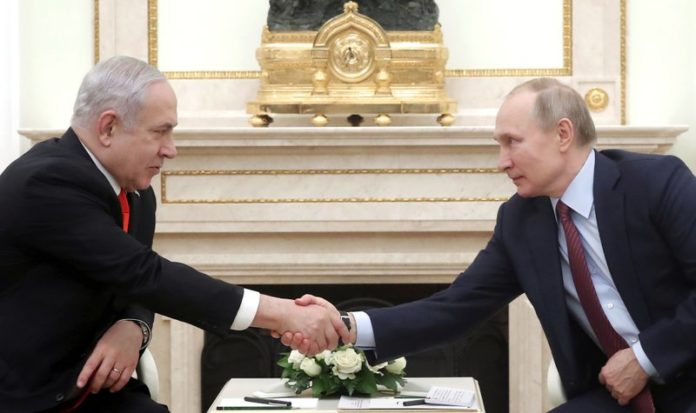 Israeli Prime Minister Benjamin Netanyahu made a quick stopover in Moscow on Thursday to brief Russian President Vladimir Putin on the new U.S. proposal for the Middle East and to bring home an Israeli woman who had been jailed on drug charges.

Netanyahu told Putin that the visit reflected the ever-warming ties between the countries, and that he was eager to hear Putin’s insights on President Donald Trump’s long-awaited blueprint to resolve the Israeli-Palestinian conflict.

But it appeared the main goal was to shuttle Naama Issachar back to Israel. The 26-year-old backpacker was arrested in April at a Moscow airport, where she was transferring en route from India to Israel with what Russian authorities said was more than nine grams of hashish in her luggage. She was convicted and sentenced to 7 1/2 years in prison.

Her plight has resonated strongly with the Israeli public, which considered her punishment excessive and saw the telegenic Issachar as a pawn in world politics.

After lengthy negotiations, Putin pardoned her on Wednesday after receiving numerous assurances and gestures from Israel, including the transfer of real estate in Jerusalem. Some in Israel also tied her case to that of a Russian hacker who Israel extradited to the U.S. instead of back to Russia, although officials in Moscow never publicly linked the two cases.

Israeli television channels went to special live coverage as she walked out onto the frigid tarmac in Moscow alongside Netanyahu and his wife, and then boarded the plane with them to return to Israel. She smiled alongside her mother but made no comment.

Speaking to reporters on the way back, Netanyahu said she was very emotional reuniting with her family and being released from prison.

The detour to pick her up resulted in some criticism that Netanyahu was seeking to boost his campaign ahead of elections on March 2. In months of campaigning, through back-to-back elections that failed to produce a governing coalition, Netanyahu has portrayed himself as a master statesman, trumpeting his close ties to Trump, Putin and other world leaders.

Netanyahu, however, brushed away any talk of a political motive, saying Issachar’s case was special and required his intervention.

“This whole affair took on such momentum that it threatened to damage vital Israeli interests,” he said on the plane ride home. “The Russians have done a lot for us and this was one land mine we had to remove.”

In his meeting with Putin, Netanyahu thanked the Russian president “on behalf of all the people of Israel for granting a pardon to Naama Issachar.”

“This moves all of us, and our gratitude is on behalf of all Israeli citizens, from the heart,” he said.

The rest of the meeting focused on the Iranian presence in neighboring Syria, other regional developments and the Trump plan.

Trump’s proposal envisions a disjointed Palestinian state while turning over key parts of the West Bank to Israel. It sides with Israel on nearly all of the most contentious issues in the decades-old conflict and attaches nearly impossible conditions to recognition of Palestinian statehood.

“You are the first leader I am speaking with after my visit in Washington for Trump’s Deal of the Century,” Netanyahu told Putin at the Kremlin. “I think there is a new opportunity here, maybe even a unique opportunity, and I’d like to discuss it with you and hear your insights.”

Trump has called his plan a “win-win” for both Israel and the Palestinians and urged the Palestinians not to miss their opportunity for independence. Palestinian President Mahmoud Abbas has dismissed the plan as “nonsense” and vowed to resist it.

Putin didn’t talk about Trump’s plan in his opening remarks, and Russian officials so far have refrained from comment — a careful stance reflecting the Kremlin’s desire to maintain warm ties with all sides as it also seeks rapprochement with the Trump administration .

Netanyahu said Russia-Israel relations are now “the best they have ever been.”