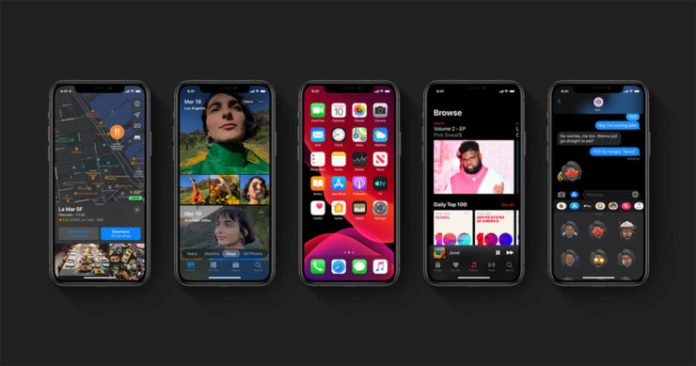 Every single year, the Apple fans and critics unite for this auspicious event. This event is no less than a gala for technology lovers, and gizmo freaks for it are the day when Apple rolls out its latest update of the iOS. This year, the date was 19th of September, and people were ecstatic about the iOS update. Now that the update has been around for three months, the iOS app development services have well and truly checked what’s under the lid in this one.

The last operating system update by Apple, iOS 12, was roaming around performance updates and making Apple phones and tablets a whole lot quicker. This time around, the updates are full of grandeur and glamour. You must have definitely heard of the dark mode and how it gives an urban and slick feel to the users, but it didn’t just stop at that. Apple’s trademark update brought a plethora of changes to its built-in applications too along with an addition that the Android fan base had for years – a swiping keyboard.

With improvements in the UI and excellent work on the UX front, this update got more felicitations than the usual range of unnecessary red marks that the previous updates had to witness. If you could title this update, it can be called a ‘Cosmetic Update extravaganza.’ Now that Apple has an image in its head as to what a perfect Operating System should look like, it makes things a whole lot streamlined, and it has started to show in the updates.

The objective of this update was the self-improvement of the iOS, and experts think that this is the ground that they will cover in a few more updates in the future.

Now that it’s established that iOS is on the right track let’s talk about all the good.

Dark Mode for the Win

It has been often said that Android OS gave a better option for customization. To match that, iOS 13 brings the dark mode that comes with an alluring look and feel. This, in itself, was the most significant cosmetic change that rejigged the whole vibe of iOS, and it’s the front end. Dark mode became reasonably accessible, and even social media bigwig Instagram supports it now. This slick, minimalist, and much-needed upgrade freshen things up in an absolute fashion.

From the navigation app to photos and reminders to cycling trackers– the built-in apps have been worked on, and they are only getting better every passing update. The new Photos app is quite a considerable upgrade, and many of Apple’s in-house applications weren’t top-notch. It’s good to see that it’s been worked upon.

Nothing comes with just the good points, and this version of iOS brings bugs along with it. Lots of them. The good thing is that viruses are addressed as quickly as possible by Apple, and this pattern is being followed religiously for a while. Nobody gives better feedback than the users who are already on the operating system, and they can comprehend as to what they expect from it.

A sound operating system means a lot of good things, and all of them should come along with it. The iOS 13 will do the same thing, and the users will surely get the hang of it in due course of time – especially in the dark mode