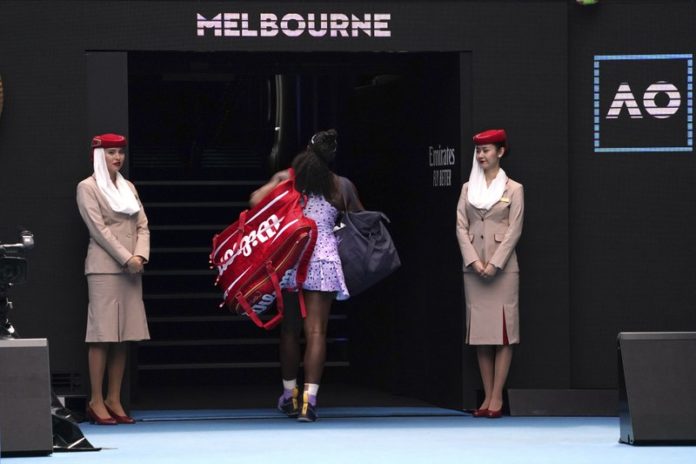 Down to what sure felt like her last chance, Serena Williams came through with a cross-court forehand winner to close a 24-stroke point, then raised her arms, held that celebratory pose and looked over toward her guest box.

Finally, on her sixth try, after 1½ hours of action, she had managed to convert a break point against 27th-seeded Wang Qiang in the Australian Open’s third round.

Right then, it appeared that the comeback was on, the bid for a 24th Grand Slam singles title could continue. It turned out that Williams only was delaying a surprising defeat.

So tough at the toughest moments for so many years, Williams just could not quite do enough to put aside some shaky serving and all manner of other miscues, instead making her earliest exit at Melbourne Park in 14 years, a 6-4, 6-7 (2), 7-5 loss to Wang on Friday.

“I was optimistic that I would be able to win. I thought, ‘OK, now finish this off.’ I honestly didn’t think I was going to lose that match,” Williams said about her mindset after forcing a third set.

She began by crediting Wang but eventually shifted to criticizing herself for not playing well enough to win.

“I didn’t return like Serena. Honestly, if we were just honest with ourselves, I lost that match,” Williams said. “I can’t play like that. I literally can’t do that again. It’s unprofessional. It’s not cool.”

Williams was broken in the final game after more than 2 1/2 hours, fittingly ending things with a backhand into the net. That was her 27th unforced error on the backhand side, part of a total of 56 miscues. Wang made only 20.

“I’m better than that,” said Williams, who trudged through the long walkway that leads to the locker room, carrying two bags, while Wang was doing the winner’s interview in Rod Laver Arena.

Later, at her news conference, Wang laughed as she said: “I always believed I could do this one day. I didn’t know which day.”

Since grabbing major championship No. 23 at the 2017 Australian Open, while she was pregnant, Williams hasn’t added to her total.

She appeared in four major finals over the past two seasons, losing each one.

And she bowed out much, much sooner this time, animated as can be, often displaying what she later called “the signature ‘Serena frustration’ look.”

Williams owns seven trophies from the Australian Open and hadn’t lost as early as the third round at either of the hard-court Grand Slam tournaments — in Melbourne or at the U.S Open — since all the way back in 2006.

Here is just one measure of how unexpected this result was: The only other time these two women faced each other came at Flushing Meadows last September — the only Slam quarterfinal appearance of Wang’s career thus far — and Williams needed all of 44 minutes to dominate her way to a 6-1, 6-0 victory. The total points were 50 to 15.

Wang quickly surpassed those game and point totals Friday, thanks in large part to nearly flawless play in the first set.

She saved all four break points she faced in that set, accumulated 10 winners and made just five unforced errors. Wang picked up the lone break she needed at love with an easy forehand putaway winner that made it 5-4, and she soon owned the set.

After that lopsided loss in New York, Wang decided she needed more powerful strokes to compete with the likes of Williams, devoting her offseason to more work in the gym.

“I think it worked,” Wang said, nodding. “You can see the result.”

Wang quickly went up a break in the second set, too. Then, when Wang served for the victory at 5-4, Williams seemed to shift the entire complexion of the match.

She was 0 for 5 on break chances until then but the sixth time was the charm. On the point of the day, with both players slugging away from the baseline, it was Williams who did what it took to take it.

She was superior in the tiebreaker, too, and on they went to a third set.

Asked whether she would party Friday night, Wang offered a simple answer: “No.”

So what were her plans?

“Rest,” she said, “and just prepare for the next match.”

That will come against 78th-ranked Ons Jabeur of Tunisia, who ended the career of Caroline Wozniacki by eliminating the 2018 Australian Open champion and former No. 1 by a 7-5, 3-6, 7-5 score.

The 29-year-old Wozniacki had announced that she would retire after this tournament. Following her final match, she sat on her courtside chair and cried.

At least the Dane was able to quickly joke about the circumstances, saying: “It was only fitting that my last match ended with a forehand error.”

She and Williams are close friends; their losses concluded at around the same time. They ran into each other in the locker room and “were both kind of bummed,” said Williams, who teared up herself while discussing Wozniacki.

This was the first Grand Slam tournament in 11 years with each of the top 10 seeded women reaching the third round. Who would have suspected Williams would be the first to lose?

Williams was only seeded No. 8, on account of how infrequently she has competed since being away from the tour while having a baby daughter in September 2017.

But she is still about as good as it gets in women’s tennis, as evidenced by her so-close-yet-so-far Grand Slam showings of late: The 38-year-old American was the runner-up at both Wimbledon and the U.S. Open in both 2018 and 2019.

She started 2020 well enough, winning a hard-court tuneup title in Auckland, New Zealand, this month for her first trophy of any sort in three years — and first as a mom.

But Williams wasn’t able to carry that success to the Grand Slam level, where it matters the most to her.

“I’m way too old to play like this at this stage of my career,” Williams said. “Definitely going to be training tomorrow, that’s first and foremost — to make sure I don’t do this again.”