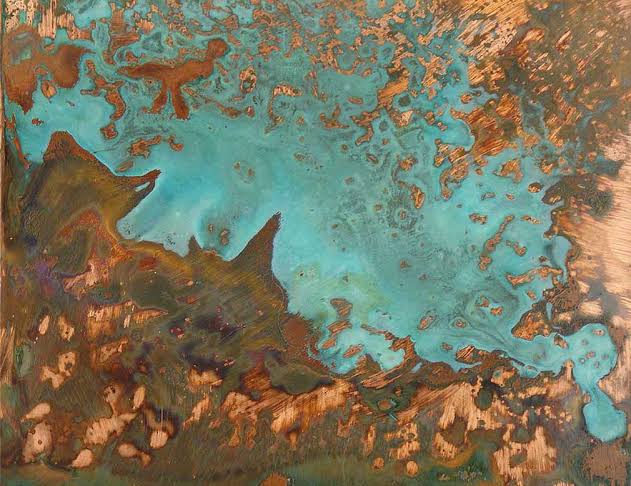 At one point, many of us have thought that the grayish-green to bright green stains on our household brass and bronze wares were a form of rust. After all, rust equals metal plus exposure to moisture and air. But not all metal exposed to air and moisture equals to rust. And though this formula applies to iron, with copper comes a little twist: a little twist called verdigris.

Verdigris is a thin layer of cuprous oxide (Cu¬2O) that develops on the surface of copper and copper alloys during prolonged exposure to moist air. Note that it does not form in dry air. Carbon dioxide and water convert the oxide into a green enamel-like coating of basic copper carbonate [CuCO3oCu(OH)2]. Unlike iron, verdigris is a protective layer that prevents any copper material from corroding. The ancient Latins called it “patina,” thought to be the result of corrosion. Surprisingly, Roman copper coins buried beneath the earth for nearly two thousand years continued to maintain the clear edges of their inscription due mainly to this grayish-green coating. Even in our present era, many coins, such as the silver dollar, develop the same blemish because of the small percentage of copper that they are minted with.

Copper is in a family of metals known to produce its own protective coating once exposed to destructive corrosive substances. Of this family, aluminum is also a member.

A fresh surface of aluminum, when oxidized, quickly becomes coated with a continuous film-like substance called aluminum oxide. It serves like a layer of varnish: thin, but durable and insoluble. And so long as this covering exists, the metal remains protected.

Zinc is another example that self-protects, producing a chemical known as, you guessed it, zinc oxide.

One other thing that has made verdigris special, this time aesthetically, is its color. And ancient man, lured mainly by its vivid green had prompted him to adopt verdigris into his family of pigments. Since then, tinctures resulting from verdigris have been known under names such as Montpellier green and viride aeris. In Roman times, this hydrated copper acetate became one of the early artificial pigments until further technology was discovered to imitate it and other copper greens using viridian, made from hydrated chromium hydroxide in 1838. Until then, paint chemists processed verdigris through a process called fusing. This resulted into a resinous composition of transparent green that artists from the eighth to the fifteenth century used to illuminate manuscripts.

It takes years of exposure to the elements for true verdigris to develop. To this day, verdigris harbors a unique beauty which gives character, and therefore more value, to a cuprous antique. Take heed, however, that though lovely is the sight of this “green rust,” it is highly poisonous, and caution must be taken in handling it.