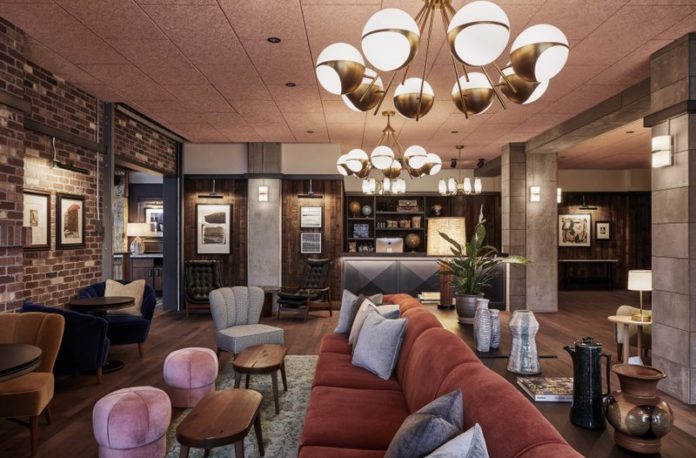 Designers of hotel spaces have traditionally tended to favor either theatrical flair (baroque finishes and opulent flourishes) or the opposite: a low-key insouciance consisting of neutral, contemporary furniture and acres of beige-ness.

That’s changing. Now, many designers are looking to the cities and neighborhoods where hotels are located for decorating inspiration. The vibe inside is skewed more “living room’’ than “lobby.’’ And in the rooms, gallery walls are supplanting generic landscape prints, and there might be the kinds of objets d’art, reading materials and soft furnishings one would have at home.

LET’S ALL GO TO THE LOBBY

“We’ve heard from our showrooms and exhibitors that they’re seeing an uptick in ‘softer’-style solutions for spaces like hotel lobbies,” says Byron Morton, vice president of leasing for NeoCon, the commercial design industry exhibition held annually in Chicago. “The lobby is increasingly a communal meeting and amenity space rather than just a pass-through.”

Tom Parker, co-founder of the design group Fettle, which has offices in London and Los Angeles, says changes in how business travelers work have impacted both the public and private spaces in a hotel.

“New technology has paved the way for the ‘gig economy’ and freelancing. People are now working flexible hours from locations that suit them. In any given city, the lobby is now the heartbeat of the public areas, filled with people working on their laptops,’’ Parker says.

“People want break-out lounge furniture and meeting tables, but when evening rolls around and the laptops are tucked away, the lobby transforms,’’ Parker says.

The company’s design for the lobby of the Hoxton Hotel in Portland, Oregon, for example, has a communal work table and a comfortable lounge seating around a fireplace. The public areas were situated in an old, converted movie theater. Tailored but comfy mohair and leather seating and warm wood side tables blend with distressed rugs and displays of ceramics, plants and books. Refurbished timber and concrete beams frame the spaces. And there’s a story about the reception area’s wood paneling.

“We used a lot of local suppliers and material for this project,” Parker says. “The area around Portland is a big producer of Maraschino cherries; the visible face of the wall is made from the outside of reclaimed cherry vats. If you look closely you can even see the imprints where the metal belts that hold the huge vats together were pressed against the wood.”

In many hotels, Parker notes, “It’s not just hotel guests who are using them, but the locals who come to work in these spaces.”

Paul Makovsky, editor in chief for Contract, a magazine focused on commercial interior design and architecture, says this mix of workspace and hospitality is being called “corporatality.”

Hotel chain CitizenM on Manhattan’s Lower East Side uses the tagline, “You may not be a New York native, but you can feel like one here.” Colorful lounge chairs face a soaring shelf wall filled with eclectic curios, art and books.

In Scotland, Glasgow’s Motel One is next to the main railway station, which takes passengers into the Scottish Highlands. The hotel commissioned oversize images from photographers Louise Scullion and Matthew Dalziel, who rode the route shooting atmospheric, romantic pictures of scenery, shaggy cows and travelers.

At the 1 Hotel in West Hollywood, California, RCH Studios extended the interior space to an “outdoor lobby.’’ Hiking trails next to the hotel were the inspiration; guests can explore a granite pathway that meanders through native greenery. Log seating and timber planters were made from salvaged, fallen trees.

ROOMS AT THE INN

High-speed internet has become more important than a work desk in today’s hotel rooms, says Parker. With lighter, thinner tech, we can work in different positions. So, there’s more lounge furniture and fewer desks, along with charging capabilities in table and sofa bases.

As in many lobbies, there’s homey decor touches in rooms, too. At the State Hotel in Seattle, artist Kate Blairstone’s wallpaper pays homage to the city’s produce, flowers and seafood, while in the rooms her custom portraits of local residents adorn the walls.

In their Bowery property in New York City, CitizenM commissioned graffiti artists to provide custom works for the stairwells, creating the Museum of Street Art for guests and neighbors to enjoy.