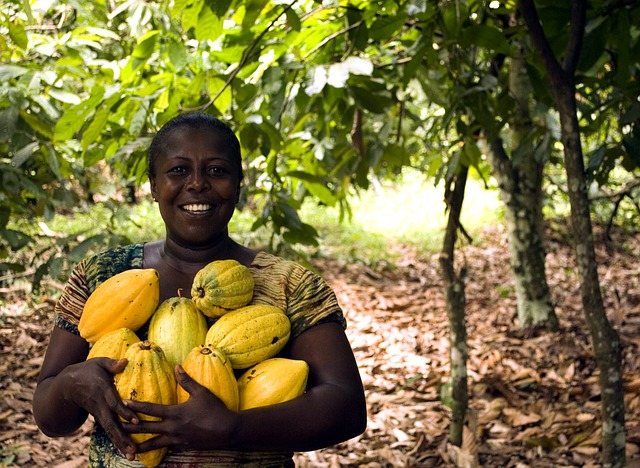 Ghana possesses a railway system which links the major towns of Accra, Kumasi and Takoradi, and encompasses an area of land which was often referred to as the Golden Triangle. The name did not reflect Ghana’s colonial name: The Gold Coast, but the fact that most of Ghana’s cocoa was grown within, or close to, the embrace of the railway. In colonial times, The Gold Coast was the world’s largest producer of cocoa and although Ghana inherited this title on gaining independence in 1957, neglect of the industry by the government of Dr Kwame Nkrumah eventually resulted in the loss of this pre-eminence. Subsequent regimes sought to revive the production of cocoa but Ghana has never yet regained the dominant position that she occupied in the 1950s and early 1960s.

Cocoa beans are reputed to have been brought back from the Portuguese island of Fernando Po around 1876 by Tetteh Quarshie, a native of Akwapem, located on a ridge of hills north of Accra. The first beans were planted at Mampong in Akwapem. Tetteh Quashie is regarded as a national hero and he has a large traffic interchange named after him at Achimota near the campus of the University of Ghana. The Akwapem tribe played a major role in exploiting cocoa by buying land and establishing farms across the south of Ghana, benefiting from the strong support of missionaries and the colonial government. In the 1920s the railways were constructed to help transport the rapidly growing cocoa output to the port of Takoradi.

Tales of the wealth of the cocoa farmers in colonial times are almost beyond belief. It is said that they competed spectacularly to show off their rapidly gained affluence. After exhausting the possibilities of conspicuous consumption, they took to having their large traditional Kente cloths embroidered with British five pound notes sewn onto the fabric. The climax came when they resorted to money burning competitions in which the winner was the person who heaped the most sterling paper currency onto the fire.

Cocoa farmers were known to be relatively very rich, and as independence approached Kwame Nkrumah sought popularity by promising to take the wealth of the cocoa farmers and give it to the nation. So it is not surprising that on gaining power the government kept low the price of cocoa paid to the farmers and added a high tax to boost national revenues. Farmers began to lose interest in cocoa production and as fewer new trees were planted output fell.

Nkrumah came to recognise the value of cocoa exports and devised a plan to try to control the fluctuating world price. At the new port of Tema he constructed four gigantic silos in which to store the cocoa beans. When the price was low he would store; when the price was high he would sell. Regrettably, no cocoa was ever stored in the silos and falling production meant that Ghana was no longer in a position to exercise control of the market. After Nkrumah’s overthrow in 1966 it was his legacy of paying a low price to the farmers that blighted Ghana’s economy for the next two decades.

The military government that took over from Nkrumah faced grave economic problems and it was the democratically elected government of Dr Kofi Busia (1969 to January 1972) that tried to revive the cocoa industry. Agricultural extension officers were appointed to tour the forest areas encouraging farmers to plant more cocoa trees. The response was less than enthusiastic as the farmers complained that cocoa trees take four years to bear fruit and then the returns would be modest. They preferred to plant annual crops or to invest in oil palm plantations to take advantage of a scarcity of palm oil that was forcing up local prices.

Acutely aware of the shortage of palm oil for soap making, the Technology Consultancy Centre (TCC) of the Kwame Nkrumah University of Science and Technology (KNUST), Kumasi, began in the 1970s to experiment with alternative raw materials. One of many locally-available fatty substances investigated was second grade cocoa butter: produce not judged fit for chocolate manufacture or for export. Unfortunately, soap made from cocoa butter smelled like chocolate and so couldn’t be used commercially for fear of children mistaking the soap for white confectionary.

The Busia government was short lived and after Colonel I K Acheampong took over in January 1972 the policy of exploiting the cocoa farmers persisted. In the late 1970s, a departing British High Commissioner was asked at Accra International Airport about Ghana’s economic plight. He said that he could see no improvement as long as the cocoa farmer was paid for his product less than the cost of production. By this time countries such as Cote d’Ivoire, Malaysia and Brazil were major cocoa producers and the world price was kept low by this abundance. It was to be more than another decade before serious support was again given to cocoa production. Ghana’s output rose again but in the 1990s it was still only about half the peak production of 557,000 tons achieved in 1964-65.

By the 1990s, there was much talk of giving primary producers a fair price for their produce and interest was roused in finding ways to add value to basic raw materials. The TCC again became involved with cocoa when it assisted a major British chocolate manufacturer to plan a programme to assist small cocoa farmers to extract and sell cocoa butter rather than raw beans. By such means the fair trade movement is helping cocoa farmers back to affluence, but it is doubtful if any will grow rich enough to rival their ancestors who were the immediate heirs of Tetteh Quarshie.