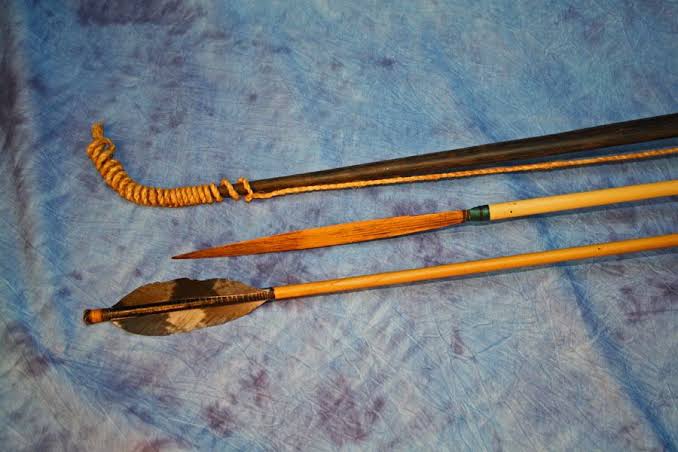 Arrows, one of human’s most ancient war and hunting tools. An efficient and accurate tool for killing from a safe distance. Understanding its history can help explain why our most ancient tool is still relevant thousands of years later.

An arrow is a shafted projectile shot with a bow. It predates the records of our history and is commonly found in most cultures. The inventors of the bow and arrow is lost in time, our story beings in the stone age. Our best guess is people invented the bow and arrow about 64,000 years ago. Some of the earliest arrowheads came from South Africa. Stone age humans were first to use bows and arrows. They crafted their bows out of pliant wood and strung it together with string made from animal gut.The arrows had of a wooden shaft with stone on one end for penetration and feathers on the other for stabilization. Prior to the bows and arrows, human were reliant upon spears. Their lives were at a higher level of risk when confronted with large mammals such as mammoths and saber-tooth tigers. As humans progressed through the ages, so did the bows and arrows. From stone tips, to bronze tips, to iron tips, humans continued to increase the accuracy and power of the arrow. The bow progressed from the long bow to the recurve bow of Central Asia, to the crossbow designed by Chinese blacksmiths.

Though the physical design of the arrow has stayed consistent, technological advancements increased. Also, specialization of war, hunting and training changed the shape and sizes of the arrowhead. Changes in arrowheads could be seen and identified through the cultures that produced them. For example, long thing arrows made by English longbowmen during the hundred year war that were more effective at punching holes in the armor of the French knights. A change made to the standard arrowhead cut down the cost of training new archers. The typical “V’ shape of the arrowheads were slightly modified by getting rid of the barbs so the arrowhead was just a cap. This allowed the archers to practice with the same arrow multiple times. Arrowheads were also altered in such a way to have barbs that would stick into a fish’s flesh, while being attached to a line and real for fishing. Bows and arrows did not make their way in to Northern America until about 4,5000 years ago. This is largely due to the use of them on horseback and that horses were not brought into the country till later than most of the world.

In current times, arrows are found in all shapes and sizes. The most popular materials are carbon, aluminium, and wood. The arrowheads differ depending on their use, but are vast in specialization. In most arrows now, the veins to stabilize the arrows in flight are plastic. Unlike our history, arrows today are used more in sport than for necessity.

The arrow is a perfect example of amazing human engineering of a tool of a simple design.