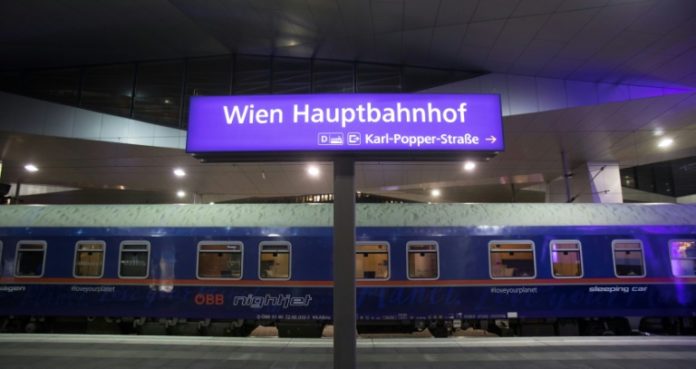 The first night train to set off for Belgium in 16 years departed from Vienna Sunday, carrying Austrian and European politicians who hope the new route can set an example as the continent tries to meet its climate targets.

The carriages of the “OBB Nightjet” pulled out of Vienna’s main station punctually at 8:38 pm to the strains of a live band playing the EU anthem “Ode to Joy”, the slogan #loveyourplanet emblazoned along their sides.

Scheduled to arrive in Brussels at 10:55 am on Monday, the rail journey emits less than a tenth of the CO2 per passenger than the equivalent flight.

Austrian state railway company OeBB has for several years been a pioneer in the revival of night trains, and OeBB board chairman Andreas Matthae said he was “proud” of the new route.

Joining a clutch of Austrian MEPs was Martin Selmayr, previously the powerful chief of staff to European Commission President Jean-Claude Juncker and now the EU’s representative in Vienna.

For British holidaymaker Daniel, 35, the train was the clear choice — not for environmental reasons but for comfort.

Liesbet Vandebroek, who lives in Austria but works for the tourism authority of Belgium’s Flanders region, said it was important for her to make the frequent journey to Brussels with “as small a footprint as possible” but also waxed lyrical about the romance of the night train.

“As a student I travelled everywhere with the night train, it’s so leisurely… and very nostalgic,” said Vandebroek.

The Vienna to Brussels service will initially run on Sundays and Wednesdays.

The return leg will run on Mondays and Thursdays with a portion splitting off to serve Munich and Innsbruck.

In October OeBB said that bookings on its night trains were up 11 percent year-on-year.

With prices for non-sleeper seats as low as 19 euros ($21), it says its services are competitive with low-cost airlines — although sleeper berths can cost considerably more.

OeBB operates, either alone or in partnership, 27 night trains with another new service to Amsterdam scheduled to start in December.

At the end of 2016 OeBB bought the night trains of the state rail operator in neighbouring Germany, Deutsche Bahn, which Matthae admitted was seen as risky at the time.

Austria’s new Green Environment Minister Leonore Gewessler said that that decision had been vindicated and that the new route was in line with the Austrian government’s ambition to make the country carbon neutral by 2040.

“There is no other city in the European Union that has so many night trains departing from Vienna, and the network can be expanded further,” Gewessler said.