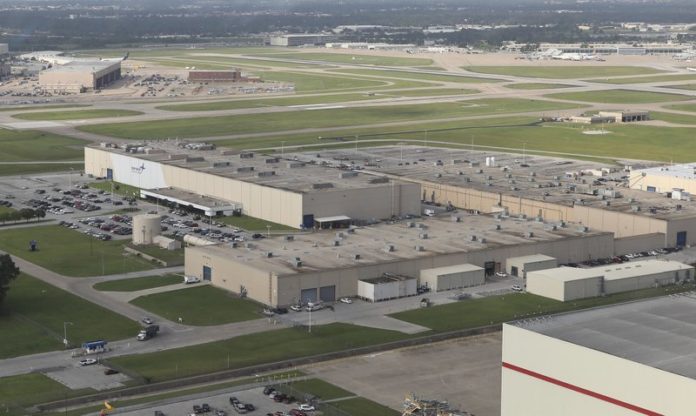 The suspension of production of the Boeing 737 Max is taking a growing toll on suppliers in Kansas, where more than 40 aerospace companies provide parts and services for production of that aircraft.

Spirit AeroSystems Holdings Inc. is the largest employer in Wichita, Kansas, which bills itself as the “Air Capital of the World” for its concentration of aerospace manufacturers. This week, Spirit asked employees if they would take voluntary buyouts.

On Thursday, U.S. Sen. Jerry Moran toured Cox Machine, Inc., to hear about the impact of the Wichita-based company. The company’s president, Jason Cox, said one-third of its work is supplying parts to Spirit AeroSystems and Boeing related to 737 Max production.

“What I am doing is trying to urge, nudge, insist that everything happen as quickly as it can, again with the caveat that we don’t want to do anything that is not safe,” Moran said.

Boeing expects to temporarily shut down production of the Max, which has been grounded for nearly 10 months, after two crashes killed 346 people.

Moran said he’s troubled that the former Boeing CEO seemed to be downplaying the significance of the problem. The Kansas Republican said he contacted President Donald Trump to let him know that “everything is not OK” in his home state or elsewhere due to the continued grounding of the 737 Max.

He said he asked Trump to ask his administration to work with him to explore all options to sustain the industry in Kansas, and suggested that businesses in the state could be considered for more defense work.

Moran said he spoke this week with the new CEO of Boeing, and reiterated the need for the aerospace giant to cooperate with the Federal Aviation Administration to get the Max back into production, and safely back into the air.

He also met with various government officials, including from the FAA.

While the FAA decides whether the airplane is safe, Cox said he doesn’t want any political considerations holding back that process and that he hopes Moran can act as a mediator.

“We have been talking about alternate scenarios since they first went down, but to be honest I never thought it would last this long,” Cox said.

Boeing has said its assembly line near Seattle will shut down in mid-January, but that it is not planning layoffs. Chicago-based Boeing Co. hasn’t said how long production will be halted. The company still has work to complete before it can win approval from the FAA for changes it is making to software and other systems on the plane. The FAA has said repeatedly it has no timetable for approving Boeing’s work.

In December, Spirit announced it would suspend production of 737 MAX fuselages on Jan. 1.

Cox Machines, which typically has about 365 employees, is down to 320 workers. Cox said he has not filled positions left vacant through attribution while the plane is grounded. Two weeks ago, the remaining Cox employees were cut back to a four-day work week, and this week the company began furloughing workers, Cox said. He declined to say how many would be furloughed.

“When Spirit made the announcement that it is suspending production is when we began trying to cut expenses,” Cox said.