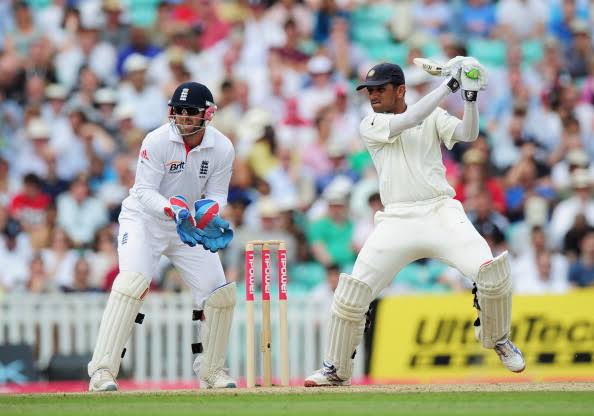 One of the greatest Cricketer ever, Rahul Sharad Dravid (born 11 January 1973) is a former Indian captain of the Indian national team.

He is the Director of Cricket Operations at National Cricket Academy, Bengaluru, India. He also monitors the progress of India A and India under-19 cricket teams. Before this he was Head Coach for the India Under-19 and India A teams from 2016 to 2019.

Under his coaching, under-19 team was runners up at 2016 u-19 Cricket World Cup and were winners at 2018 u-19 Cricket World Cup. In 2019, BCCI appointed Dravid as Head of NCA. Known for his sound batting technique, Dravid has scored nearly 25,000 runs in international cricket and is widely regarded as one of the greatest batsmen in the history of cricket.
He is colloquially known as Dependable or Mr. Dependable, and often referred to as The Great Wall or The Wall by Indian cricket followers.

Born in a Marathi family and brought up in Bangalore, he started playing cricket at the age of 12 and later represented Karnataka at the under-15, under-17 and under-19 levels. Hailed as The Wall, Dravid was named one of the best five cricketers of the year by Wisden Cricketers’ Almanack in 2000 and received the Player of the Year and the Test Player of the Year awards at the inaugural ICC awards ceremony in 2004. In December 2011, he became the first non-Australian cricketer to deliver the Bradman Oration in Canberra.

As of December 2016, Dravid is the fourth-highest run scorer in Test cricket, after Sachin Tendulkar, Ricky Ponting and Jacques Kallis. In 2004, after completing his century against Bangladesh in Chittagong, he became the first and the only player till date to score a century in all the ten Test-playing countries. As of October 2012, he holds the record for the most catches taken by a player (non-wicket-keeper) in Test cricket, with 210. Dravid holds a unique record of never getting out for a Golden duck in the 286 Test innings which he has played. He has faced 31258 balls, which is the highest number of balls faced by any player in test cricket. He has also spent 44152 minutes at the crease, which is the highest time spent on crease by any player in test cricket.

Rahul Dravid, along with Glenn McGrath were honoured during the seventh annual Bradman Awards function in Sydney on 1 November 2012. Dravid has also been honoured with the Padma Shri and the Padma Bhushan award, India’s fourth and third highest civilian awards respectively.
In 2014, Rahul Dravid joined the GoSports Foundation, Bangalore as a member of their board of advisors. In collaboration with GoSports Foundation he is mentoring India’s future Olympians and Paralympians as part of the Rahul Dravid Athlete Mentorship Programme. Indian badminton player Prannoy Kumar, Para-swimmer Sharath Gayakwad and young Golfer S. Chikkarangappa was part of the initial group of athletes to be mentored by Rahul Dravid. In July 2018, Dravid became the fifth Indian cricketer to be inducted into ICC Hall of Fame.

Dravid is known for his technique, and had been one of the best batsmen for the Indian cricket team. In the beginning, he was known as a defensive batsman who should be confined to Test cricket, and was dropped from the ODI squad due to a low strike rate. However, in a period of his career, he began consistently scoring runs in ODIs as well, earning him the ICC Player of the year award. His nickname of ‘The Wall’ in Reebok advertisements is now used as his nickname. Dravid has scored 36 centuries in Test cricketat an average of 53.19; this included five double centuries. In one-dayers, he has an average of 39.49, and a strike rate of 71.22. He is one of the few Indians whose Test average is better at away than at home, averaging almost five runs more in foreign pitches. As of 23 September 2010, Dravid’s Test average in abroad is 55.53, and his Test average at home is 50.76; his ODI average abroad is 37.93 and his ODI average at home is 43.11. Taking those matches in consideration that were won by India, Dravid averages 66.34 runs in Tests and 50.69 runs in ODIs.

Dravid’s sole Test wicket was of Ridley Jacobs in the fourth Test match against the West Indies during the 2001–2002 series. While he has no pretensions to being a bowler, Dravid often kept wicket for India in ODIs. Dravid is now a specialist batsman, averaging 63.51 in matches played since 1 January 2000.

Dravid was involved in two of the largest partnerships in ODIs: a 318-run partnership with Sourav Ganguly, the first pair to combine for a 300-run partnership, and then a 331-run partnership with Sachin Tendulkar, which is a world record. He also holds the record for the greatest number of innings played since debut before being dismissed for a duck. His highest scores in ODIs and Tests are 153 and 270 respectively. Each of his five double centuries in Tests was a higher score than his previous double century (200*, 217, 222, 233, 270).

Also, Dravid is the current world record holder for the highest percentage of runs scored in matches won under a single captain, where the captain has won more than 20 Tests. In the 21 Test matches India won under Ganguly’s captaincy, Dravid scored at a record average of 102.84 runs; scoring 2571 runs, with nine hundreds, three of them being double-centuries, and ten fifties in 32 innings. He contributed nearly 23% of the total runs scored by India in those 21 matches, which is almost one run out of every four runs the team scored.

An innings-by-innings breakdown of Dravid’s Test match batting career, showing runs scored (red bars with purple bars for not out) and the average of the last ten innings (blue line).

He was named one of the Wisden cricketers of the year in 2000. Though primarily a defensive batsman, Dravid scored 50 runs not out in 22 balls (a strike rate of 227.27) against New Zealand in Hyderabad on 15 November 2003, the second fastest 50 among Indian batsmen. Only Ajit Agarkar’s 67 runs off 21 balls is faster than that of Dravid.

In 2006, it was announced that he would remain captain of the Indian team up to the 2007 World Cup in the West Indies.

However, after the series against England, he stepped down as the Indian captain due to personal reasons. MS Dhoni took over as ODI captain, whereas Anil Kumble replaced him in test matches.

In 2007, he was dropped from the Indian ODI Squad following poor series against Australia. Dravid went back to play for Karnataka in the Ranji Trophy, scoring 218 runs against Mumbai.

In 2008, he made 93 runs in the first innings of the Perth test, the highest score of the match, to help India win and make the series 1–2. However, he was ignored by selectors for the subsequent one-day tri-series.

After a barren run in Test matches in 2008, Dravid came under increasing media pressure to retire or be dropped. In the Second Test against England in Mohali, he scored 136 runs, putting on a triple-century stand with Gautam Gambhir.

After reaching 10,000 test runs milestone, he said, “It’s a proud moment for sure. For me, growing up, I dreamt of playing for India. When I look back, I probably exceeded my expectations with what I have done over the last 10 to 12 years. I never had an ambition to do it because I never believed – it is just a reflection of my longevity in the game.”

Dravid is also one of the two batsmen to score 10,000 runs at a single batting position and is the fourth highest run scorer in Test Cricket, behind Tendulkar, Ponting and Kallis.

What is Dao Minh Quan Spirit?